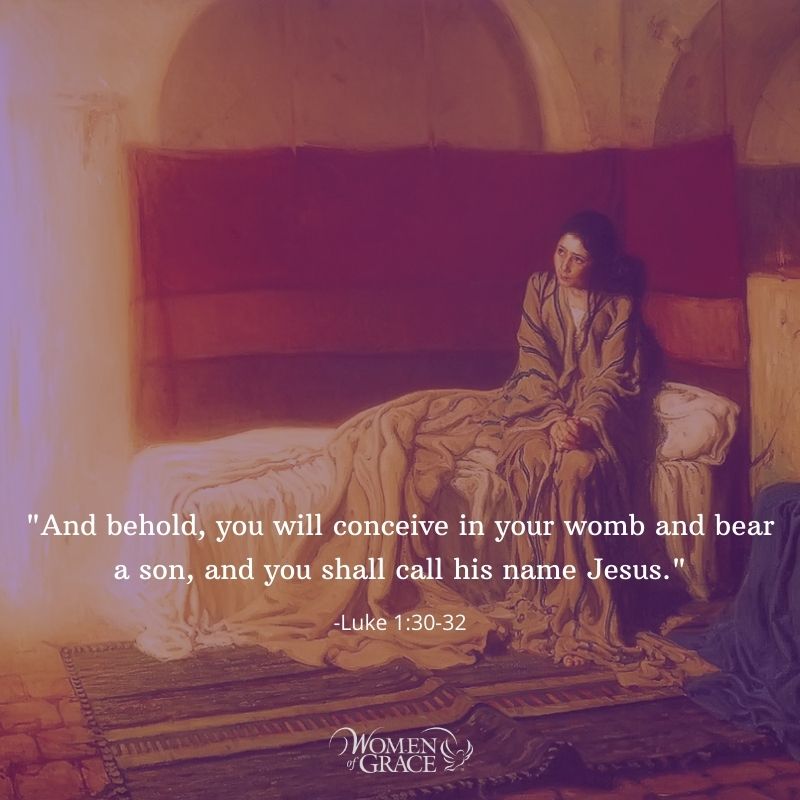 The season of Advent is upon us. It is the time of year when we prepare for the coming of the Lord, both as the infant Son of God born in a lowly manger, and also as our Triumphant King in His second coming when he will reign for all eternity.

There are so many beautiful Advent traditions that the Church offers us including: the lighting of the Advent wreaths; utilizing daily Advent calendars; decorating a Jesse Tree; celebrating the wonderful feasts of St. Nicholas, Our Lady of Guadalupe, St. Lucy and St. Andrew; attending penance services as a family; participating in the Festival of Lessons and Carols, and the list goes on and on.

One tradition that you may wish to embrace this year is the praying of the Joyful Mysteries of the Rosary using Sacred Scripture. These mysteries help us to reflect on the events leading up to Jesus's birth and the earliest moments of His life. The Church goes so far as to recommend the prayer of the Joyful Mysteries on Sundays during Advent, a day normally reserved for the Glorious Mysteries.

Contemplating the Sacred Scripture passages related to each mystery is a fruitful way to journey with the Holy Family as you reflect upon the events leading up to Christ's birth and early life of ministry.

The First Joyful Mystery: The Annunciation of the Angel Gabriel to Mary (RSVCE Luke 1:26-38)

In the sixth month the angel Gabriel was sent from God to a city of Galilee named Nazareth, to a virgin betrothed to a man whose name was Joseph, of the house of David; and the virgin’s name was Mary. And he came to her and said, “Hail, full of grace, the Lord is with you!” But she was greatly troubled at the saying, and considered in her mind what sort of greeting this might be. And the angel said to her, “Do not be afraid, Mary, for you have found favor with God. And behold, you will conceive in your womb and bear a son, and you shall call his name Jesus.

He will be great, and will be called the Son of the Most High; and the Lord God will give to him the throne of his father David, and he will reign over the house of Jacob for ever; and of his kingdom there will be no end.”

And Mary said to the angel, “How can this be, since I have no husband?” And the angel said to her, “The Holy Spirit will come upon you, and the power of the Most High will overshadow you; therefore the child to be born will be called holy, the Son of God.

And behold, your kinswoman Elizabeth in her old age has also conceived a son; and this is the sixth month with her who was called barren. For with God nothing will be impossible.” And Mary said, “Behold, I am the handmaid of the Lord; let it be to me according to your word.” And the angel departed from her.

The Second Joyful Mystery: The Visitation of Mary to Elizabeth (RSVCE Luke 1:39-56)

In those days Mary arose and went with haste into the hill country, to a city of Judah, and she entered the house of Zechari′ah and greeted Elizabeth. And when Elizabeth heard the greeting of Mary, the babe leaped in her womb; and Elizabeth was filled with the Holy Spirit and she exclaimed with a loud cry, “Blessed are you among women, and blessed is the fruit of your womb! And why is this granted me, that the mother of my Lord should come to me? For behold, when the voice of your greeting came to my ears, the babe in my womb leaped for joy. And blessed is she who believed that there would be a fulfilment of what was spoken to her from the Lord.” And Mary said,

“My soul magnifies the Lord, and my spirit rejoices in God my Savior, for he has regarded the low estate of his handmaiden. For behold, henceforth all generations will call me blessed; for he who is mighty has done great things for me, and holy is his name. And his mercy is on those who fear him from generation to generation. He has shown strength with his arm, he has scattered the proud in the imagination of their hearts, he has put down the mighty from their thrones, and exalted those of low degree; he has filled the hungry with good things, and the rich he has sent empty away. He has helped his servant Israel, in remembrance of his mercy, as he spoke to our fathers, to Abraham and to his posterity for ever.”

And Mary remained with her about three months, and returned to her home.

The Third Joyful Mystery: The Nativity, the Birth of Our Lord Jesus in Bethlehem (RSVCE Luke 2: 1-21)

In those days a decree went out from Caesar Augustus that all the world should be enrolled. This was the first enrollment, when Quirin′i-us was governor of Syria. And all went to be enrolled, each to his own city. And Joseph also went up from Galilee, from the city of Nazareth, to Judea, to the city of David, which is called Bethlehem, because he was of the house and lineage of David, to be enrolled with Mary, his betrothed, who was with child. And while they were there, the time came for her to be delivered. And she gave birth to her first-born son and wrapped him in swaddling cloths, and laid him in a manger, because there was no place for them in the inn.

And in that region there were shepherds out in the field, keeping watch over their flock by night. And an angel of the Lord appeared to them, and the glory of the Lord shone around them, and they were filled with fear. And the angel said to them, “Be not afraid; for behold, I bring you good news of a great joy which will come to all the people; for to you is born this day in the city of David a Savior, who is Christ the Lord. And this will be a sign for you: you will find a babe wrapped in swaddling cloths and lying in a manger.” And suddenly there was with the angel a multitude of the heavenly host praising God and saying,

“Glory to God in the highest, and on earth peace among men with whom he is pleased!”

When the angels went away from them into heaven, the shepherds said to one another, “Let us go over to Bethlehem and see this thing that has happened, which the Lord has made known to us.” And they went with haste, and found Mary and Joseph, and the babe lying in a manger. And when they saw it they made known the saying which had been told them concerning this child; and all who heard it wondered at what the shepherds told them. But Mary kept all these things, pondering them in her heart. And the shepherds returned, glorifying and praising God for all they had heard and seen, as it had been told them.

And at the end of eight days, when he was circumcised, he was called Jesus, the name given by the angel before he was conceived in the womb.

The Fourth Joyful Mystery: The Presentation of Jesus in the Temple (RSVCE Luke 2:22-40)

And when the time came for their purification according to the law of Moses, they brought him up to Jerusalem to present him to the Lord (as it is written in the law of the Lord, “Every male that opens the womb shall be called holy to the Lord”) and to offer a sacrifice according to what is said in the law of the Lord, “a pair of turtledoves, or two young pigeons.” Now there was a man in Jerusalem, whose name was Simeon, and this man was righteous and devout, looking for the consolation of Israel, and the Holy Spirit was upon him. And it had been revealed to him by the Holy Spirit that he should not see death before he had seen the Lord’s Christ. And inspired by the Spirit he came into the temple; and when the parents brought in the child Jesus, to do for him according to the custom of the law, he took him up in his arms and blessed God and said,

“Lord, now lettest thou thy servant depart in peace, according to thy word; for mine eyes have seen thy salvation which thou hast prepared in the presence of all peoples, a light for revelation to the Gentiles, and for glory to thy people Israel.”

And his father and his mother marveled at what was said about him; and Simeon blessed them and said to Mary his mother,

“Behold, this child is set for the fall and rising of many in Israel, and for a sign that is spoken against and a sword will pierce through your own soul also, that thoughts out of many hearts may be revealed.”

And there was a prophetess, Anna, the daughter of Phan′u-el, of the tribe of Asher; she was of a great age, having lived with her husband seven years from her virginity, and as a widow till she was eighty-four. She did not depart from the temple, worshiping with fasting and prayer night and day. And coming up at that very hour she gave thanks to God, and spoke of him to all who were looking for the redemption of Jerusalem.

And when they had performed everything according to the law of the Lord, they returned into Galilee, to their own city, Nazareth. And the child grew and became strong, filled with wisdom; and the favor of God was upon him.

The Fifth Joyful Mystery: The Finding of Jesus in the Temple (RSVCE Luke 2:41-52)

Now his parents went to Jerusalem every year at the feast of the Passover. And when he was twelve years old, they went up according to custom; and when the feast was ended, as they were returning, the boy Jesus stayed behind in Jerusalem. His parents did not know it, but supposing him to be in the company they went a day’s journey, and they sought him among their kinsfolk and acquaintances; and when they did not find him, they returned to Jerusalem, seeking him. After three days they found him in the temple, sitting among the teachers, listening to them and asking them questions; and all who heard him were amazed at his understanding and his answers. And when they saw him they were astonished; and his mother said to him, “Son, why have you treated us so? Behold, your father and I have been looking for you anxiously.” And he said to them, “How is it that you sought me? Did you not know that I must be in my Father’s house?” And they did not understand the saying which he spoke to them. And he went down with them and came to Nazareth, and was obedient to them; and his mother kept all these things in her heart.

And Jesus increased in wisdom and in stature, and in favor with God and man.

Pick up your weapon, the Rosary, and pray with us for our weekly Women of Grace Warrior's Rosary Crusade every Wednesdays at 4PM ET. Click the image below to join and if you've already registered, you should receive a reminder link directly from Zoom. Please be sure to share the information below with your friends and family! 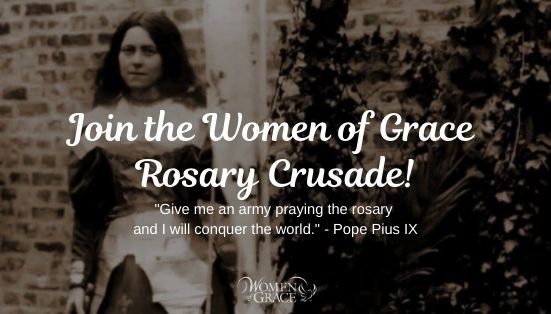