Everything about the young girl named Bernadette Soubirous spoke of humility. If anyone had told her struggling parents how widely her name would become known, they never would have believed it. Yet it was this simple, virtually uneducated girl who had been chosen to receive the highest of privileges.

The Soubirous family was desperately poor, living in a small, dank space in a former jail. Bernadette, the eldest child, born in 1844, suffered from chronic poor health, including recurrent bouts of asthma. She was needed to help care for her siblings so was sadly lacking in education. Although she had a great desire to receive her First Communion, regular attendance at catechism classes had not been possible.

February 11, 1858: Bernadette’s life changed dramatically after what began as a routine errand for her mother – to collect sticks for fireplace fuel. With her sister Toinette Marie and friend Jeanne, Bernadette walked to the banks of the River Gave. Toinette and Jeanne waded across a shallow stretch of frigid water. Just as Bernadette was preparing to join them, though, a sudden wind and a rustling sound drew Bernadette’s attention to the riverbank where a grotto, called Massabielle, appeared bathed in golden light from which emerged a beautiful young Lady.

The Lady smiled at Bernadette, who reacted by dropping to her knees with her rosary in her hands. The Lady took her own rosary, which had been hanging on her right arm, into her hands while Bernadette prayed the decades, the Lady reciting only the Glory Be. No words were exchanged.

Although Bernadette desired secrecy, word of the vision spread rapidly, bringing the quiet private life of the Soubirous family to an abrupt halt. What followed was a series of challenging, often frightening, circumstances affecting the family, their community, and especially Bernadette herself.

It is perhaps understandable that the startling revelation of an apparition by a simple 14-year old girl initially would be relegated to a flight of youthful imagination, but Bernadette suffered greatly in those early days as she endured mocking within her community and disbelief even on the part of her parents and their parish priest. 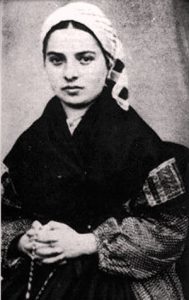 Throughout the ensuing ordeal, Bernadette never wavered in her testimony, even in the face of dire threats by local authorities. Her description of “the beautiful Lady” remained consistent: 16 or 17 years of age; dressed in a white veil and robe girdled with a blue ribbon; bare feet with a golden rose atop each; on her right arm, a rosary of white beads and gold chain.

The Lady so captivated Bernadette that she returned to the grotto on two more occasions. At the third apparition, the Lady spoke for the first time, using polite, formal language to request that Bernadette return on fifteen additional days. She also spoke seriously of the future: she could not promise Bernadette happiness in this life, but only in the next.

As word of the apparitions spread, the numbers accompanying Bernadette to the grotto grew. Throughout the total of eighteen apparitions, only Bernadette was able to see the figure she called the “Beautiful Lady” and to hear her speak. However, the crowds noticed the visible alteration of Bernadette’s appearance, her face radiantly transfixed by the vision she beheld.

The apparitions continued. On one occasion, the Lady told Bernadette to drink from the stream – a puzzling direction since there never had been a natural flow of water at Massabielle. When Bernadette scratched at loose dirt on the ground, a small pool formed, eventually forming a running stream.

When the Lady directed Bernadette to tell the priest that she wanted a chapel built on the site of the grotto, and also that she desired processions to come there, Bernadette complied. Still skeptical, he replied that the Lady would need to reveal her identity for these requests to be fulfilled.

It was not until the sixteenth apparition, on the Feast of the Annunciation – March 25, 1858 – that the Lady identified herself with the words, “I am the Immaculate Conception.” Bernadette repeated these words just as she had heard them, although in her simplicity and innocence, she had no understanding of their meaning. The doctrine of the Immaculate Conception had been promulgated by Pope Pius IX only four years prior. 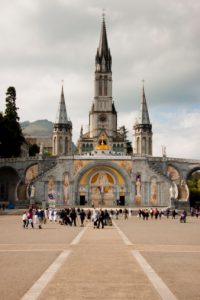 The final apparition took place on the Feast of Our Lady of Mount Carmel, July 16, 1858. Yet while the apparitions had ended, a period both deeply spiritual and also troubling and difficult for Bernadette continued. Over and over again, she attempted to explain the inexplicable – simply, sincerely, and consistently, never changing her story. She repeated the Lady’s frequent injunctions to prayer, sacrifice, and penance for the salvation of sinners, not only making others aware of them, but also incorporating them into the very fabric of her own life.

Bernadette was no stranger to suffering – in the extreme poverty of her life, in the misunderstanding and ridicule she withstood through the apparitions, and in the intense physical pain which plagued her final years on earth. Despite her sufferings, Bernadette never returned to Massabielle, never availed herself of the healing waters of that spring whose inception she had witnessed firsthand. Having entered the Convent of the Sisters of Charity at Nevers, France, Bernadette – then Sister Marie-Bernarde – died there from tuberculosis at age 35.

Lourdes remains among the most frequently visited pilgrimage sites in the world. Numerous cures – physical, emotional, and spiritual – have been credited to the waters which continue to flow today. Perhaps any salutary effects of the apparitions at Lourdes can be summed up in a well-known quote of Saint Thomas Aquinas: “To one who has faith, no explanation is necessary. To one without faith, no explanation is possible.” Saint Bernadette no doubt would agree.