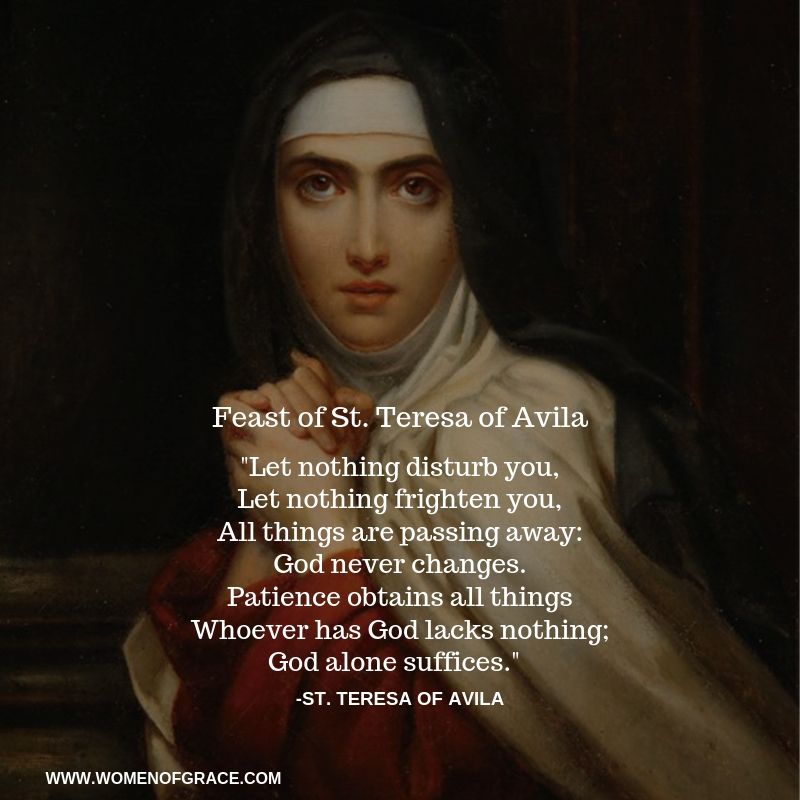 St. Teresa of Avila shows us it is never too late to get serious about our prayer life. Born Dona Teresa Sanchez Cepeda Davila y Ahumada, Teresa was an active child with a big imagination and great sensitivity of heart. Little Teresa and her brother Roderigo were intrigued by the lives of the saints and the martyrs, and often sought to imitate their holy example.

When Teresa was fourteen, her mother died. This was a turning point in the young woman’s life. The young cousin who came to keep Teresa company had worldly ways that greatly influenced the young saint. One of their pastimes was reading tales of chivalry and romance, of which Teresa later wrote, “These tales did not fail to cool my good desires, and were the cause of my falling insensibly into other defects.”

Teresa’s father, Don Alonzo, was not blind to the change in his daughter; he decided to send her to an Augustinian convent, to be educated among other girls of her social class. A serious illness interrupted Teresa’s education, however, and she was brought home to recuperate.

After her recovery she spent time at the home of a pious uncle, who gave her the Letters of St. Jerome to read. These letters sparked a desire in her heart for religious life but her father withheld his consent. Fearing that if she waited she would lose her resolve, Teresa sneaked away and secretly entered the Carmelite Convent of the Incarnation outside the city of Avila. One year later, after making her profession, she was once again struck by a serious sickness. Don Alonzo removed her from the convent and, after a period of intense illness, she began to regain her health.

This time, her devout uncle gave Teresa a book by Father Francis de Osuna, which introduced Teresa to the prayer of recollection and the prayer of quiet. This book led her in the practice of mental prayer, from which she soon progressed to more advanced stages of contemplation. After three years, Teresa went back to the convent. Sixteenth-century convent life was not conducive to prayer. Young nuns were permitted to receive guests in the convent parlor, and Teresa soon found her time filled with visitors and idle conversation. She soon gave up the practice of mental prayer altogether, a decision she later regretted.

By the time Teresa finally returned to the practice of mental prayer she was thirty-nine years old and had been a nun for twenty years. She was never to abandon her life of prayer again. As her interior life progressed, Teresa was given extraordinary visions and locutions; these brought her closer to God and yet convicted her of her shortcomings. In time, she translated her insights into a classic spiritual work called The Interior Castle, a book comparable in its theological weight and significance to St. Augustine’s Confessions. Eventually, Teresa moved out of the Carmel of the Incarnation, and established the Discalced (shoeless) Carmelite order, which kept a more primitive (ascetic) rule of life. Despite great difficulties and persecution, she founded sixteen other houses throughout Spain, and died at one of these houses at the age of 67. Because of her enormous theological contribution to the Church especially in the realm of prayer, she was declared a Doctor of the Church.

“An intelligent mind is simple and teachable; it sees its faults and allows itself to be guided. A mind that is dull and narrow never sees its faults even when shown to them. It is always pleased with itself and never learns to do right.” ~St. Teresa of Avila

Faith in Action Like St. Teresa, we often become ensnared by distractions and circumstances that tempt us to forsake our commitment to pray. What excuses do you most commonly use? Ask yourself, “How can I increase my resolve?”