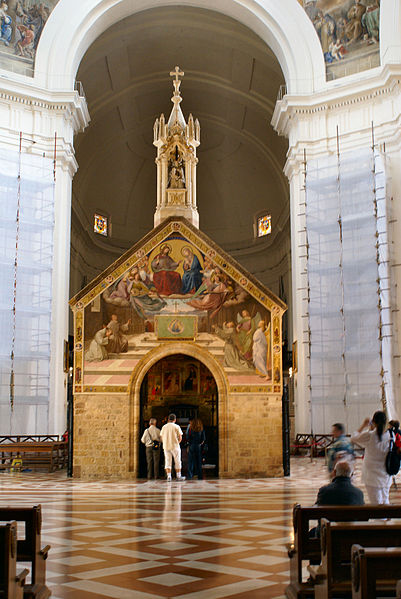 The original Portiuncula, located within the Papal Basilica of Saint Mary of the Angels in Assisi

For Franciscans worldwide, August 2nd marks a very important, special feast day – the Feast of Our Lady of Angels. The title of Our Lady which this feast commemorates has a direct connection to Saint Francis of Assisi (1182 – 1226) and to the Religious Orders which he founded. The “little portion,” or Portiuncula, brings to mind significant events which resound in our hearts as we celebrate this feast day once again.

Early in his spiritual journey, having left worldly things behind to follow Jesus’ Gospel in a radical manner, Francis came to know and love a small piece of land outside Assisi and the miniscule chapel which stood on it. The chapel had been named Our Lady of the Angels in light of the legend stating that she and the angels had been known to appear there. Having fallen into disuse and serious disrepair, the Portiuncula, or “little portion,” became the focus of Francis’ attention and loving care. He undertook the work of repairing the structure in testament to his great devotion to the Mother of his Lord Jesus.

As time went on, the Portiuncula served as the starting point for Francis’ fledgling Order of Friars Minor. The Order grew rapidly, and once it had been established to the point where friars were sent out on mission to various locations, the Portiuncula became the meeting place where they converged for their annual meetings, known as Chapters.

The Portiuncula also became associated with the Order of Franciscans for women when the beautiful, nobly born Clare of Assisi left her family home in secrecy and fled there, where Francis awaited her arrival. With his own hands, he cut off her flowing golden locks, and she exchanged her costly garb for a habit of rough material. In this humble manner was born the Religious Order known as the Poor Clares. In time, a Third Order of lay people, desiring to follow in Francis’ footsteps while living out their secular vocations, would emerge.

As the life of Francis of Assisi came full circle, and he realized that his time on earth was approaching its end, it was to the Portiuncula that he directed his friars to carry him. There his saintly soul, already so closely united to his Savior, took flight to the true, eternal union for which he had longed.

The Portiuncula still stands, a tiny structure sheltered inside the great Basilica of Santa Maria degli Angeli (Our Lady of the Angels) near Assisi. The three Franciscan Orders whose seeds were sown at the Portiuncula continue to welcome new members, eight hundred years after the humble Friar of Assisi first discovered “the little portion.”

The title of Our Lady of the Angels has connections in the United States as well – in the naming of the city of Los Angeles, California, by missionaries; and in replicas of the original Portiuncula in San Francisco, California, and at Franciscan University at Steubenville, Ohio.