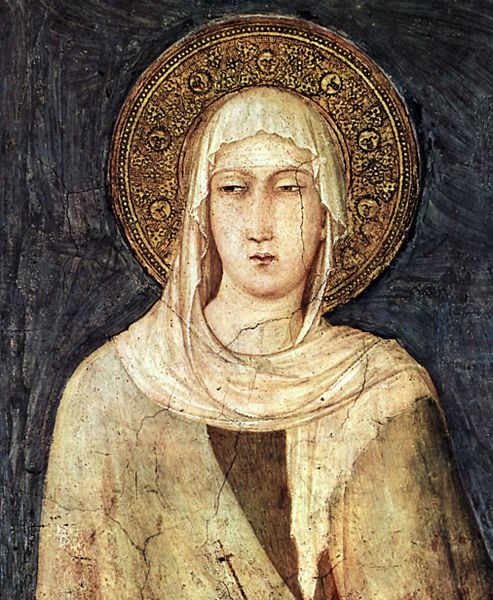 August 11th, the Feast of Saint Clare of Assisi (1194 – 1253), offers an opportunity to explore the life of a woman of shining virtue.  Her religious vocation was a direct outgrowth of that of her contemporary and mentor, the beloved Saint Francis (1182 – 1226).

Thomas of Celano, disciple and first biographer of Francis, describes a young woman of outstanding character, singularly devoted to God:  “…most eager in her desire for divine love, endowed with wisdom and excelling in humility, bright in name, more brilliant in life, most brilliant in character” (The Life of Saint Francis).

Chiara (Clare) was born into a family of nobility, unlike Francis, whose father was a member of the untitled merchant class.  In the patriarchal society of their small Italian town, lines of distinction between classes were drawn sharply.  While their paths, then, would not have crossed socially, in her youth, Clare was introduced to the public preaching of Francis and felt the desire to emulate the profound simplicity of his lifestyle.

While Clare was affected deeply by Francis’ impassioned teachings, the seeds of her religious vocation had been sown in childhood; she had a reputation for holiness from her youth.  Her mother, Ortulana, was extremely devout, taking her children with her on pilgrimages and in her outreach to the poor.

At about age seventeen, Clare began meeting with Francis, greatly attracted by the emerging spirituality of his growing Order of friars.  So it was that on the night of Palm Sunday, 1212, Clare left her family home in secrecy and fled to the Portiuncula, the diminutive church outside Assisi where Francis’ Order had its beginnings.

On that fateful night, Clare’s costly garments were replaced with a habit of rough fabric.  A veil covered her head after Francis performed the ceremony known as tonsure, shearing off Clare’s abundant locks. Neither realized that they had set into motion the initiation of the Order of Poor Ladies, later known as the Poor Clares, the Franciscan Second Order.

Clare was not the only member of her family to follow Francis in his radical adherence to the Gospel of Jesus Christ. Within weeks, her younger sister Caterina had joined her.  Male family members set out in a heated attempt to convince the women to return to their home, but they were unsuccessful. (Caterina, renamed Agnes in religion, later became Saint Agnes of Assisi.)  Clare’s mother and another sister, Beatrice, soon joined the fledgling Order.

Before leaving her home, Clare had distributed her inheritance to the poor, leaving her without the traditional dowry for women joining a religious Order. She began religious life as a poor penitent worker in two monasteries of sisters until Francis installed her and her small beginning band at the Church of San Damiano where he had heard the voice of Jesus speaking to him from the crucifix. The rude enclosure devised for the Poor Ladies there became Clare’s home for the remainder of her life.

Ingrid J. Peterson, O.S.F., writes:  “Both Clare and Francis were chosen by God for great things. Both attracted followers early in their paths. Francis wandered; Clare determined to live in the enclosure. Eventually, they shared the fact that the Gospel meant everything to them” (Clare of Assisi:  A Biographical Study).

Radical love for Jesus and an overwhelming desire to imitate Him in all things characterized Clare as it did Francis. Like Francis, Clare devoted herself, her life, and her efforts to following Jesus and His Gospel strictly and joyfully. Although it seems a contradiction in terms, this was true especially where the matter of poverty was concerned.  Both saints derived great joy from the freedom bestowed on them by Francis’ beloved Lady Poverty.

In the case of the Poor Ladies, the fact that no dowry was required for entry allowed admissions from any and all social classes. In this way, women from the wealthiest to the poorest of the poor became equals committed to a life of prayer, silence, hard work, and bodily mortification within their enclosure. The Order grew quickly as more women were attracted to this life of holiness; it was only out of obedience to Francis that Clare accepted the status of abbess.

Despite her life in enclosure, Clare continued to communicate with Church leaders, including the Pope. Spirited and determined, she held firm to her insistence on “the Privilege of Poverty” (refusing any and all ownership) for herself and her Sisters. This became a recurring theme when she received repeated, well-intentioned pressure to relax the severe restrictions placed upon the members of her Order.  Clare was adamant:  following Jesus meant living a life of strict poverty, manual labor, and reliance on God.

Clare displayed great courage also when the safety of Assisi was threatened by invading forces. Clare cried out to heaven for help, calling down to earth the power of the Blessed Sacrament; the invaders retreated.

Various prelates composed versions of a Rule of Life for the Poor Ladies over time.  The Rule which Clare composed herself for her Sisters – the first woman religious to do so – finally received the approval of Pope Innocent IV only two days before her death which occurred on August 11, 1253.

Clare outlived Francis by 27 years. While they shared much in common, their crowning common circumstance was the canonization of each just two years following their respective deaths. The holiness of their lives was so evident that sainthood was decreed with rare speed.

Clare’s light shines brightly today, just as it has since the Middle Ages. Saint Clare of Assisi, pray for us!