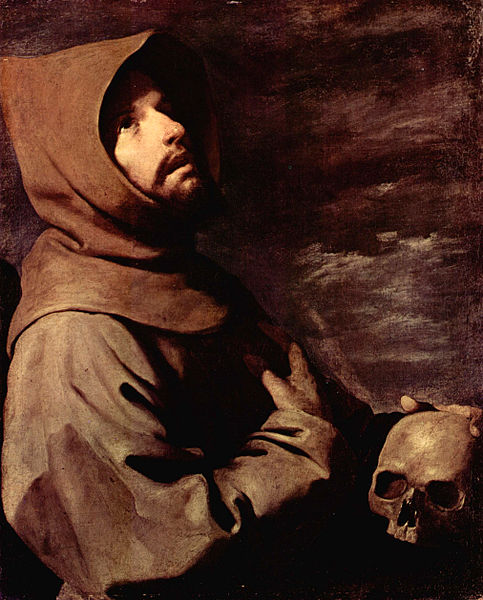 The Feast of Saint Francis of Assisi (1182-1226) is celebrated by the universal church on October 4th each year. In many locations, events such as the Blessing of Animals take place on or around this date to commemorate the beloved Italian saint’s great love and respect for all of God’s creatures. Surely, there is much to celebrate in the life of this holy man around whom many legends have survived over the past eight centuries.

There is, however, another feast celebrated by Franciscans, this one occurring just a few weeks before the October 4th date. Each year on September 17th, religious and lay Franciscans around the world commemorate the imposition of the Stigmata on Saint Francis.

The term Stigmata refers to the imposition of bleeding wounds on hands, feet, and side representing those which Jesus endured in the final hours of His life on earth. This spiritual phenomenon has a lengthy history in the Church, Saint Francis being the very first person of record gifted with this sign of unity with Jesus Christ.

Francis’ conversion from wealthy, life-of-the-party youth to ascetic deacon and preacher, totally dedicated to his Lady Poverty, has been documented thoroughly. Reading about his life, we become aware immediately of this fact: the firm foundation of his ministry was his all-consuming love for and devotion to His Lord and Savior. Lost in ecstatic prayer, passionately desiring to grow ever closer to Jesus, Francis repeatedly immersed himself in contemplation of Christ crucified.

Saint Francis devoted his religious life to strict adherence to Jesus’ Gospel and to imitation of the Savior in any way possible; for example, in the many references to Jesus’ custom of retiring to private places to pray. Interspersed with itinerant preaching, like Jesus, Francis habitually retired to hermitages, caves, and remote mountain locations for solitary communion with his God.

One such occasion took place in late summer of the year 1224. As was his custom, Francis journeyed to Mount Alvernia (sometimes spelled La Verna) to undertake a solitary 40-day fast in preparation for the September 29th Feast of Saint Michael the Archangel. His intense period of prayer took on an even more profound significance on the Feast of the Exaltation of the Holy Cross, September 14th.

According to Saint Bonaventure, early biographer of Saint Francis, Francis’ contemplation on this auspicious occasion ascended to levels of spiritual heights we can barely imagine. A vision that at first appeared as a flaming six-winged seraph then revealed the figure of a crucified Man whom Francis beheld to the depths of his soul. His whole being consumed with the vision, Francis was transfixed with intense mixed emotions of sorrow and joy.

As the vision continued, fiery lights appeared to descend from heaven to earth, leaving upon Francis’ body the marks borne by his Savior during His final agony. Francis would bear the Stigmata for the remaining two years of his life.

Saint Bonaventure continues: “Because of this new and astounding miracle unheard of in times past, Francis came down from the mountain a new man adorned with the sacred stigmata, bearing in his body the image of the Crucified not made by a craftsman in wood or stone, but fashioned in his members by the hand of the living God.”

Eight hundred years later, one of Francis’ followers was signed similarly with the wounds of Christ – Pio of Pietrelcina, the beloved Capuchin priest canonized in 2002. Padre Pio’s Spiritual Direction for Every Day quotes a personal letter of spiritual direction from Saint Pio concerning Jesus’ “sweet” invitation to deny oneself, take up your cross, and follow Him (see Mt 16:24): “It was because of this invitation that our seraphic brother St. Francis exclaimed in ecstasy that the good he was awaiting was so great that every pain was a delight to him … Let us follow the divine Master on the road to Calvary and carry our cross. And if it pleases him to put us on the cross … let us thank him and consider ourselves fortunate that such honor is shown to us.”

Like his Seraphic Father Francis, Saint Pio suffered greatly from the Stigmata – physically, of course, but more so from the marks’ visibility on his body. Both Francis and Pio accepted the suffering but would have preferred to bear it privately and attempted to conceal the physical evidence of the wounds as much as possible.

Regarding the significance of the September 17th feast, Father Daniel Horan, O.F.M., writes: “The Feast of the Stigmata is a celebration of a Christian life lived as fully and authentically as possible. The 'grace' that was given to Francis was not some random burden or some freak sideshow illness, it is a visual and corporeal representation of what only God can typically see -- a baptized man who lived as fully as he could bearing the resemblance of Christ.”

Perhaps this is the message we can take to our hearts as, with the Church worldwide, we celebrate the feast of il Poverello, the humble poor man of Assisi, whose renown spans the globe today. Saint Francis would have us center our lives as he did – in imitation of the One he strove to emulate in all things – even to bearing the wounds that united him to the Cross. What a feast day gift that would be!

Saint Francis of Assisi, pray for us!