By Susan Brinkmann, OCDS Staff Journalist After a citizen complained to the American Civil Liberties Union (ACLU) that the state's Senate was violating the separation of church and state because it sometimes invoked the name of Jesus in their prayers, the legislative body has become the first state legislature in the country to do away with the tradition of praying for blessings upon their work. 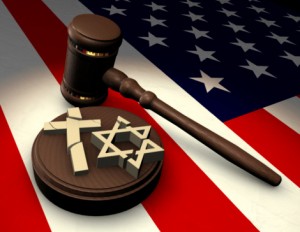 The Associated Press is reporting that after the complaint was received and the ACLU threatened action, the state attorney general's office advised the Senate that their practice of inviting speakers from various religious backgrounds to preach before every session would probably not survive a court challenge. This led to an evaluation by a Senate committee that at first recommended the use of nonsectarian, nonpolitical invocations that did not reference deities. But in the end, the Senate opted to do away with prayer entirely. "They (the ACLU) continue to threaten governments with lawsuits to try to force them into capitulating to their view of society," said Brett Harvey, an attorney for the Alliance Defense Fund, made up of Christian lawyers to defend free faith speech. "Governments should take a stand for this cherished historical practice." As the AP reports, every state legislature prays to bless their  work with some paying chaplains to lead the prayers and others, like Hawaii, inviting members of the community to speak on a topic of their choosing. An ACLU lawsuit forced the Indiana House to temporarily halted opening prayers several years ago, but the practice was restored in 2008 after a federal appeals court overturned a lower court's decision. The U.S. Supreme Court has ruled that legislative prayers are permissible in some circumstances, but the court hasn't considered the issue since 1983. Sen. Sam Slom, the only Republican in the 25-member Senate, pleaded for making prayers voluntary rather than eliminating them altogether. "The Senate must stand for something and not back away when there are challenges by individuals or organizations who make it their point nationally to have this as an objective," Slom said. "As intelligent as we may be, we can still call on someone higher to help us and guide us." © All Rights Reserved, Living His Life Abundantly®/Women of Grace®  http://www.womenofgrace.com