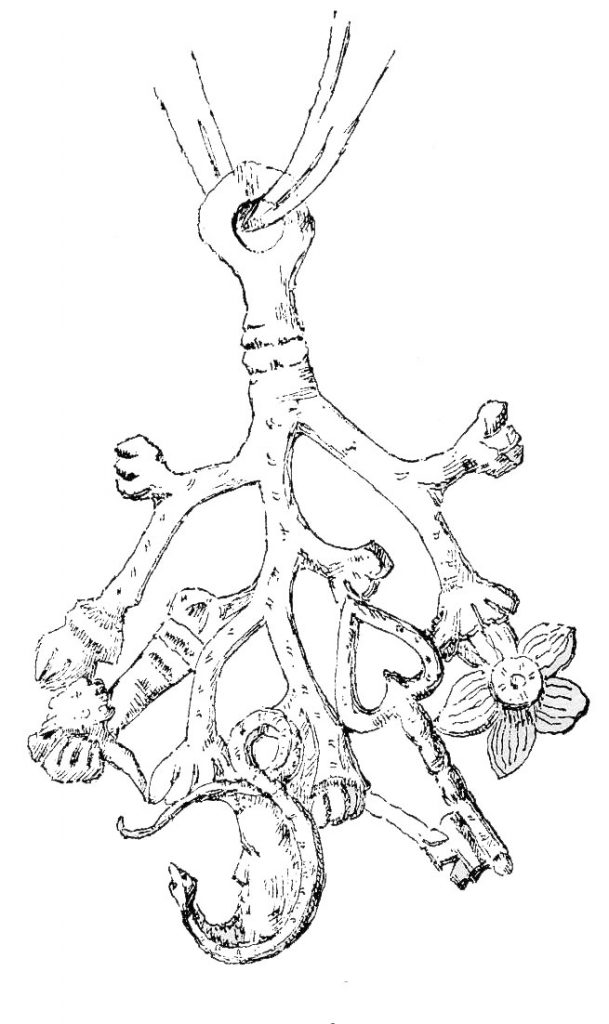 Anonymous writes: “I heard that wearing a cimaruta symbol wards off evil. Is it okay to wear one? If it wards off evil, isn’t that a good thing?”

No, the wearing of talismans to ward off evil is never a good thing because it’s a superstition. In fact, by relying upon the alleged power of an inanimate object, you’re placing your faith in the same dark powers that you’re trying to protect yourself from! Let me explain.

For those who never heard of it, the cimaruta is an old Italian good luck charm which is rooted in paganism. As this article explains, the main design is in the shape of a sprig of rue, which is an herb commonly used in Italian magic. The branch is divided into three stems which symbolize three goddesses – Hecate (the key), Diana (the moon), and Proserpina (the serpent). The design can also feature other objects such as a fish or dolphin which also symbolizes Diana, an owl which symbolizes the devil, and an eagle which supposedly gives one the ability to see evil coming from far away.

Even though cimaruta designs gradually began to include Christian symbols, such as the sacred heart of Jesus, this does not make up for it being used as a “charm” that has the power to ward off evil. Anytime we place our belief in the alleged power of an inanimate object, we engage in the superstitious practice of idolatry, which is a grave offense against God.

The same can be said about belief in the stars (astrology), omens, witchcraft potions, and other “lucky charms” such as rabbits feet, cornicellos (Italian horn), Eye of Medusa, Hamsa Hand and other objects meant to protect us from curses. Relying on these objects encourages us to consort with powers that are not sourced in God – which is never a good thing.

The Catechism of the Catholic Church is quite clear about these practices, calling them “reprehensible” (No. 2117).

Instead of purchasing a cimaruta charm, why not invest in a crucifix or other object that can be blessed and worn as a reminder of the powerful protection of God? The Brown Scapular of Our Lady of Mount Carmel (requires investiture) is another sacramental that offers powerful protection to those who wear it out of a sincere desire to place themselves under Her loving care.

Exorcists tell us that the devils themselves vouch for the efficacy of these objects when used with faith and not a single one has ever said they were put off by a talisman such as the cimaruta symbol.

Protection from evil is far too important to be left to gimmicks. Invest in the real deal – Jesus Christ – Who alone has the power to protect you from evil.

Women of Grace® has compiled a library of over 1400 articles on New Age and occult related material and has been offering them to the public for more than a decade – at no charge! If you appreciate our research, please prayerfully consider making a donation to support this vital work! Click here to donate!