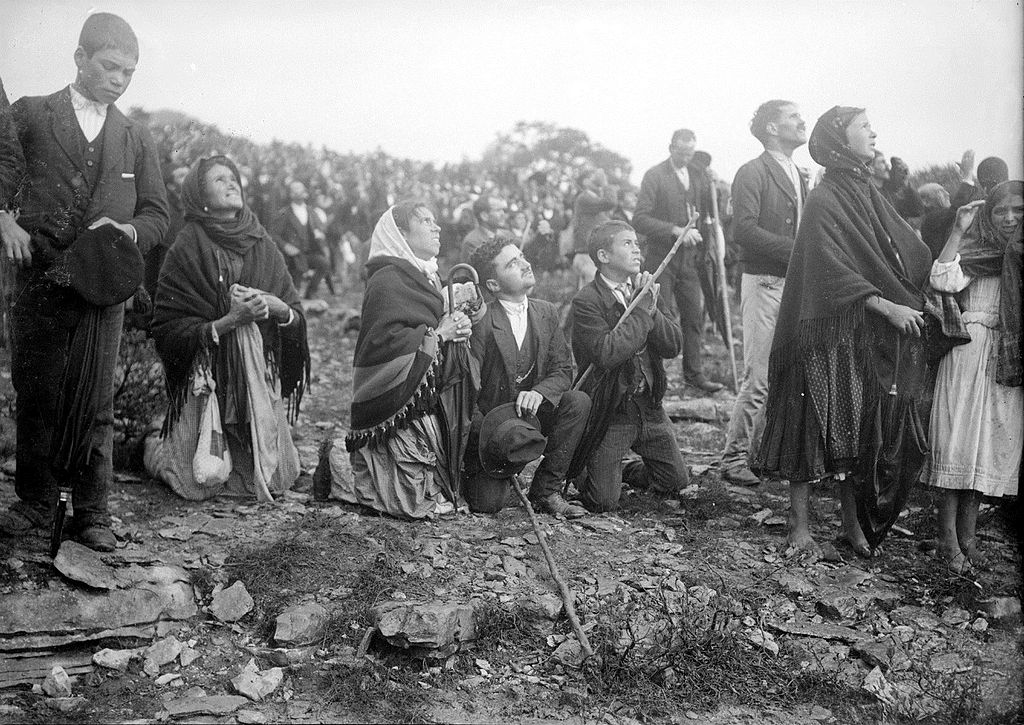 People watching the sun on October 13, 1917 in Fatima, Portugal (photo courtesy of WikiCommons)

We all know the story of the miraculous apparitions of Our Lady at Fatima and her messages beseeching the world to conversion and devotion to Her Immaculate Heart. However, the little-known impact of these apparitions on the country of Portugal, as recounted by Father Emil Neubert, S.M., S.T.D. in his book, Queen of Militants, reveals a steady stream of miraculous events that led to a dramatic restoration of the faith in that country.

Here is a rapid resume of the extraordinary things the Immaculate Virgin did for Portugal in less than twenty-five years.

At the beginning of the twentieth century, the moral and religious condition of Portugal was frightful. In 1910 an atheistic republic was established; in 1911 the separation of Church and State was decreed. The years from 1910 to 1913 were years of terror. Priests and bishops were imprisoned or banished; religious orders were suppressed; almost all the seminaries were closed or confiscated; missioners were left languishing or abandoned. Freemasonry was all powerful. From 1910 to 1926 there were sixteen revolutions with forty changes of ministers.

On the thirteenth of May, 1917, a Lady clothed in light appeared to three little shepherds at Fatima, near a town of Portugal . . . The Lady instructed them to say the Rosary and to offer some acts of penance and then asked them to return on the thirteenth of the five following months. . .

At each new meeting, the Lady revealed a little more of the designs of God . . . She requested the consecration of the world to the Immaculate Hear of Mary, for God’s help would come to men only through this Immaculate Heart. She foretold that at the last apparition, on October 13, a great miracle would be performed which everyone would see.

On the day when the great miracle promised by the Blessed Virgin was to take place, there was a downpour of rain all morning; the crowd was drenched to the skin. However, at midday the sky cleared. Mary showed herself to the three little shepherds and told them that she was the Queen of the Rosary, and that she wishes people would be converted and would pray. Then in the sight of the 70,000 spectators the sun which had just come from behind the clouds began to whirl and twirl. This happened three times, lasting three or four minutes each time, illuminating everything, trees, crowd, and earth, in all the colors of the rainbow. Then it zigzagged into the sky and came hurtling down as if it were to fall upon the crowd. The people threw themselves upon the ground and cried for mercy. Then the sun resumed its place and all discovered that their clothes were perfectly dry.

This material miracle, however, was only the sign of another far greater miracle which Mary was to work – the conversion of Portugal. 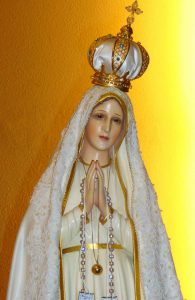 Less than 15 days after the last apparition, the first sign of a new attitude appeared when a well-known anti-Christian paper protested against a sacrilegious crime committed by some sectarians at Fatima. That was in October, 1917. In 1918, the bishops were recalled from exile and were able to hold a meeting at Lisbon. The military chaplaincy service was organized and diplomatic relations with the Holy See were resumed.

Masonic lodges assassinated the president of the Republic and sought to reintroduce the reign of anticlericalism. But their attempts failed.

In 1926, the first national council was held. In 1928, there came to power the famous Oliveira Salazar, a great Catholic and a great statesman, the providential man for the financial, civil, political, and religious restoration of Portugal.

About 1936 a new peril threatened the country. Russian bolshevists had decided to establish communism in Spain and Portugal so that they would be able to spread it more surely afterward, east and west, throughout all of Christian Europe. We know how well they succeeded at first in Spain. It did not seem that Portugal would be able to resist their activity, organized as it was, with satanic skill. To ward off the danger, the bishops saw salvation only in recourse to the Blessed Virgin. They promised in 1936, by what they called an anti-communistic oath, to have the whole nation make a pilgrimage to Our Lady of Fatima if Portugal were preserved from the communist peril. While on the Spanish side of the frontier, the “Reds” massacred, profaned, pillaged, and burned priests, religious, churches and convents to extirpate every last trace of Christianity, Portugal enjoyed the greatest peace. Accordingly, in 1938 a very large pilgrimage of a half million of the faithful made its way to Fatima to thank the Blessed Vi rgin for her miraculous protection.

In 1940, Portugal signed with the Holy See what was, from the Christian point of view, the most perfect concordat in these modern times. Throughout the country, the faith was proudly professed, the sacraments were frequented, and Catholic Action flourished. Priestly vocations were numerous: in eight years the number of religious increased fourfold. Then came World War II, much more terrible that the first, as Our Lady of Fatima had predicted it would be. Almost all the nations of the world were plunged into unspeakable misfortunes and sufferings, yet Portugal, under the protection of Mary, pursued its peaceful way.

What the Immaculate Virgin has done for Portugal, she will do for all the countries which will consent to consecrate themselves to her and to live according to that consecration. You and your companions can help to bring this about.

How can you help to bring about the conversion of the world? Become a militant in Mary's Army! Join us for a five-week course based on the book, Queen of Militants, and learn how to let Our Lady form you into a soldier for Christ! Click here for more information.