By Susan Brinkmann, OCDS Staff Journalist The Archdiocese of Philadelphia has announced that it is setting aside a potential grave site that will be used to bury the hundreds of victims of a local abortionist who kept their corpses and body parts in jars throughout his clinic. 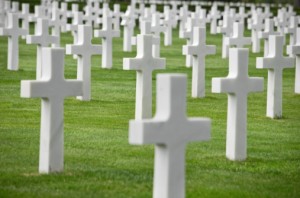 The Catholic Standard and  Times (CST) is reporting that the Archdiocese is now accepting contributions for a burial fund which will be used to bury hundreds of babies who were aborted by Dr. Kermit Gosnell of West Philadelphia. According to a grand jury report, a search team discovered the fetal remains during a raid last year. Calling the clinic a "house of horrors," they found infant remains "haphazardly stored throughout the clinic in bags, milk jugs, orange juice cartons and cat food containers. Some fetal remains were in a refrigerator, others were frozen." Because the remains are still considered evidence, they may not become available for burial until after the trial has concluded and, if necessary, all appeals have been exhausted. If they do become available, the Archdiocese will request permission to give them a proper burial. Auxiliary Bishop of Philadelphia John J. McIntyre said, “Every effort will be made to identify the babies as individuals and bury them that way. If there are body parts, we would probably bury them in a dignified manner, in one coffin.” Bishop McIntyre said the burial offer is “testimony to the Church’s respect for all human life from the moment of conception to natural death.  If we can move peoples’ hearts through this story to see the true sacredness of all human life, then we can say that these infants did not die in vain,” he said. Donated money will be kept in a special fund until the bodies are released, at which time the money will be used to "pay for a memorial and other things, such as the caskets,” Bishop McIntyre said.  If donations exceed the funeral costs, Bishop McIntyre said that the remaining money would be used to help bury other infants whose parents were unable to afford a funeral or a burial. When the remains are released to the Archdiocese, a Mass will be celebrated which will be open to anyone wishing to pay their respects to these children. Donations can be sent to the Archdiocesan Infant Memorial Fund, Room 830, 222 N. 17th St., Philadelphia, PA 19103. © All Rights Reserved, Living His Life Abundantly®/Women of Grace®  http://www.womenofgrace.com