By Susan Brinkmann, OCDS Staff Journalist During a meeting with young married couples at the closing ceremony of Italy's Eucharistic Congress, Pope Benedict XVI gave sage advice to families on dating, commitment and the false belief that living together before marriage can somehow guarantee a happy future. 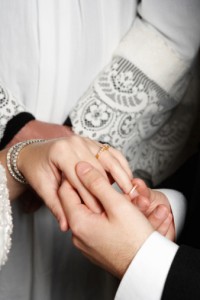 According to Romereports.com, the pope met with hundreds of young couples in the industrial city of Ancona, Italy, where he answered a question posed by Massimiliano and Fabiana who represented all the couples who were present. “The frailty of the bond upsets us, especially how easily it breaks," Massimiliano said. "Often, we don't marry until everything is safe, a house, a job ... Also, the definitive nature of marriage, makes it harder to make a decision, creating a sense of uncertainty.” In response, the Pope said: “Educate yourself on the freedom of fidelity. It leads to a life where you can care for one another, until the point where you live for one another. Get ready to choose 'forever' with conviction, because that is the true expression of love.” The pope went on to say that dating should lead to a path of maturity where people can discover just how important the other person is in their life.  All love, is based “on gratitude, sacrifice, forgiveness and mutual respect,” he said, and warned that taking this route isn't always easy.  “Do not believe that living together before marriage guarantees the future. By burning certain stages, you risk burning love itself. Time needs to be respected gradually, just like the expressions of love.” During the same visit, the pope also met with priests, asking them to help families and couples in crisis.  “Be friendly and compassionate toward those who find it hard to respect the commitments of marriage," he said, "And also with those who have not respected it in the past.” At the end of the meeting, which took place during the closing ceremony of Italy's Eucharistic Congress, he reminded couples that when faced with a problem, prayer and the Eucharist are powerful sources of strength. © All Rights Reserved, Living His Life Abundantly®/Women of Grace®  http://www.womenofgrace.com