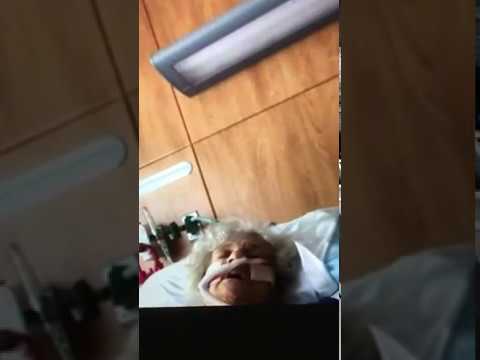 After a Minnesota hospital decided to cut off the oxygen supply needed by a 64-year-old lung cancer patient, the woman’s impassioned YouTube plea rallied the public – and lawyers - who came to her defense and saved her life.

The Life Legal Defense Foundation is reporting on the story of Catie Cassidy, a cancer patient who is receiving care at Fairview Hospital in Edina, Minnesota. Even though her condition warrants a constant oxygen supply, the hospital inexplicably planned to remove the oxygen on May 1, which would have resulted in her death by suffocation.

A hospital representative asked her if she wanted to have her oxygen removed and Catie adamantly said, “no!”

Catie relayed this to the hospital’s chaplain who was sent to her room by the hospital to prepare her to be euthanized. On a video that went viral, Catie revealed that she knew what the hospital was planning to do and that she was still fighting and “not ready” to die.

Shortly thereafter, attorneys at the Life Legal Defense Foundation were told of the situation and immediately came to Catie’s defense.

“I am appalled that a hospital would even consider withdrawing oxygen from a patient who has clearly communicated that she wants to live,” said Life Legal Executive Director Alexandra Snyder. “When asked if she wants her oxygen removed, Catie’s response was ‘NO! I want to live!’ Withdrawing Catie’s oxygen to cause her death is active euthanasia, which is illegal in Minnesota and every other state. We implore the hospital to do the right thing and provide the care Catie needs.”

On the day that Catie’s oxygen was supposed to have been cut off, the hospital relented.

“We received news today that Fairview Hospital in Edina is fully cooperating with Catie’s health care proxy and that they will continue to provide Catie with oxygen as needed.”

Fairview Hospital issued a statement on its Facebook page claiming that the news reports about Catie’s case were “inaccurate.”

“Because of privacy laws, we cannot comment on a specific patient’s medical condition. We can share, however, how we address end-of-life care. End-of-life care is focused on comfort care during the dying process. We communicate closely with the patient or, if they are unable to participate in conversation, with their designated decision-maker if they have one. We do our best to honor the patient’s known wishes, whether those wishes are to prolong life or to stop treatment.”

They go on to acknowledge that euthanasia is illegal in the state of Minnesota and that their facility does not practice it.

However, they offered no explanation for why they were planning to remove Catie’s oxygen which would have caused her death. Some people who chose to comment on the Facebook page claimed that people were jumping to conclusions based on the word of a dying woman on sedation; however, this doesn’t explain why the chaplain claims to have been told to prepare Catie for death.

In the end, it was only after the hospital began receiving phone calls from the public and a letter from attorneys that this woman wish to die naturally was upheld.

“Life Legal is pleased that Catie will receive the care she needs and that her wish to fight for her life as long as she can will be honored,” Snyder said. “It is time for us to have a larger conversation about the inherent value of every human life and about our moral obligation to protect those who are most vulnerable.”