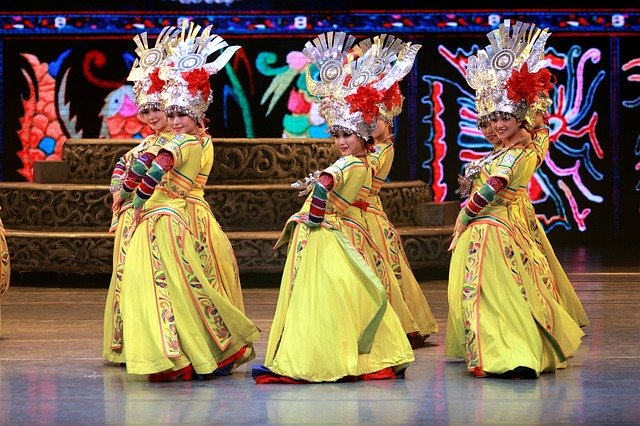 Over the past month, we have received several requests from people who received gifts to Shen Yun performances as Christmas gifts. At first, I was surprised by the question because I had seen ads in my hometown for these shows and thought they looked like spectacular performances (albeit a bit pricey). But then I started to do a little research and was quite surprised by what I found.

For those who are not familiar with Shen Yun (which means “the beauty of divine beings dancing”) this is a performing arts show that bills itself as the “world’s premier classical Chinese dance and music company.” According to the website, it was established in New York in 2006 by “elite Chinese artists” who “came together with a shared vision and passion – to revive the lost world of traditional Chinese culture and share it with everyone.”

Sounds great, doesn’t it? What could be wrong with that?

Because our readers are astute, they must have been receiving a “check in the Spirit” that made them pose this question to us – so I decided to keep digging.

That’s when I came across an article in The New Yorker, written by Jia Tolentino, entitled, “Stepping into the Uncanny, Unsettling World of Shen Yun.”

Uncanny? Unsetting? I was intrigued.

As it turns out, the “elite Chinese artists” who started the company in 2006 are Falun Gong expats living in the U.S.

Falun Gong, aka Falun Dafa (the names are used interchangeably) is a spiritual movement based on the great law of the wheel of Dharma (Buddhist teaching on the path to enlightenment) that has become better known in recent years by the name of its prescribed exercises – Falun Gong. Falun Dafa orginally grew out the Chinese practice of qi gong which consists of breathing exercises and meditation.

According to this article found in Christianity Today, the founder of Falun Dafa is Li Hongzhi who claims that a superior power sent him to Earth to introduce this spirituality to the world. They quote from an interview with Time Asia in 1999 where this former grain store clerk and trumpet player says, “You can think of me as a human being. I don’t wish to talk about myself at a higher level. People wouldn’t understand it.”

Hongzhi teaches that the Falun Gong symbol, called the law wheel which is supposedly a spinning mini-replica of the universe, is placed in each practitioner’s lower abdomen. (He is the only person who can put the wheel into a practitioner’s belly.) As the wheel spins inside them, it absorbs the universe’s energy. Access to one’s law wheel is gained by practicing Falun Gong.

There are five sets of Falun Gong movements which consist of lotus postures and hand movement exercises set to Chinese music.

According to an article in the April 2001 International Religious Freedom Report, the purpose of Falun Gong is “to cultivate a person’s higher energy or ‘gong.’ This is done not only through physical exercise but more importantly through the development of a person’s xinxing (or mind nature). It is this emphasis … on a non-material energy that differentiates Falun Gong from other forms of qigong.”

This group has experienced extreme persecution in China by a communist government that aims to eradicate it through a vicious campaign of forced ideological conversion and re-education as well as arbitrary arrests, forced labor and physical torture.

So what does all this have to do with Shen Yun shows?

As it turns out – everything.

Tolentino went to a show and described what she saw during the performance: “After we took our seats, two hosts with animatronic smiles, speaking both Chinese and English, began introducing a series of dances, which were called things like ‘Goodness in the Face of Evil’ and ‘The World Divinely Restored’… The hosts started talking about a spiritual discipline called Falun Dafa, and then introduced a dance in which a beautiful young follower of Falun Dafa was kidnapped and imprisoned by Communists, who harvested her organs.”

The host went on to ask the audience, "Would everyone like to learn a little Chinese?" He then taught them how to say “I love Shen Yun” in Chinese.

Tolentino continues: “The dances continued, sleeves swirling, skirts rippling. A man came onstage to sing a song in Chinese, which was translated on the screen behind him. ‘We follow Dafa, the Great Way,’ he began, singing about a Creator who saved mankind and made the world anew. ‘Atheism and evolution are deadly ideas. Modern trends destroy what makes us human,’ he sang.”

Tolentino called this show what it is – “religious-political propaganda – or, more generously, an extremely elaborate commercial for Falun Dafa’s spiritual teachings and its plight vis-à-vis the Chinese Communist regime.”

According to her research, as of 2019 there were six Shen Yun companies, each consisting of forty or more dancers, plus about forty Chinese musicians who were trained at the Fei Tian Academy in upstate New York. Last year, they toured more than 96 American cities as well as performing around the world in places such as Vancouver, Auckland, Taipei and Berlin. A non-profit, the organization reported seventy-five million dollars in assets and more than twenty-two million dollars in revenue in 2016.

Searching for corroboration of Tolentino’s view turned up similar criticisms, such as this article by Kristen Tillotsen of the Star Tribune. She interviewed David Davies, an associate professor for anthropology and East Asian studies at Hamline University in St. Paul, who called the troupe a fund-raising vehicle for Falun Gong and a combo of a “Wild East Show and a Billy Graham traveling tent show.”

Davies said: “They blend the aesthetic of silk-robed, exotic dancing Chinese women with a strong political message, a Cold War narrative of religious oppression. They call it Chinese culture, but that’s a more difficult thing to nuance. It’s a heavily managed propaganda device for Falun Gong.”

Tillotsen said others who experienced the show also found it to be slightly “off.”

Of course the Chinese Embassy is warning people away from the show, but they’re doing so for their own purposes. The Chinese government has been rightfully condemned for its vicious persecution of the millions of Falun Gong followers in that country.

Americans certainly sympathize with any persecuted minority and stand united against any form of religious persecution, but this does not mean that we are obligated to support the spread of their strange beliefs.