While the country commemorates those who served on Veterans Day, the Church invites us during the month of all souls to pray for and honor our war dead.

Veterans Day originated as Armistice Day on Nov. 11, 1919, marking the anniversary of the end of World War I. It is a special day in which we celebrate the soldiers, marines, sailors and airmen who served their country to protect the freedoms that many today take for granted. We have wreath-laying ceremonies, speeches for the occasion and parades to honor the war heroes. All are appropriate opportunities to learn about and to honor those who fought and died in conflicts.

But do we remember them in prayer?

Do we visit their gravesites during the month of November and impart our indulgences to them?

Do we offer a Mass for them and for those who suffer the terrible consequences of war and those who are left behind?

Pray for the Deceased

To pray for our war dead, attend a Mass in their name or have a Mass offered for them — and, also, for those who did not die in battle but who in any way were involved in or affected by war and those families who were left behind. For Masses, a novena of Masses and Gregorian Masses, contact the Pious Union of St. Joseph at PiousUnionofStJoseph.org.

St. Thérèse in the Trenches

During the First World War of 1914-1918, the presence of Sister Thérèse in the trenches was amazingly evident. Even though she died in 1897, there are accounts that she was among the French soldiers on the battlefield, supporting them spiritually. She even appeared to them and saved them! They requested medals and holy cards from the nuns at Lisieux. On the battlefield at night the soldiers would gather together to read about her life to console them from the torments of war. Too numerous to mention, fascinating stories were shared with the nuns at the Carmel in Lisieux.

An excerpt of a letter received from Henri Gougeon, a soldier in the 6th Colonial, stated: “She brings me calm and composure in times of peril.” And, true to the Little Flower’s charism, there were even roses on the battlefield.

The founder of the Marians of the Immaculate Conception, St. Stanislaus Papczynski, lived in Poland in the 17th century. His order led the way for the canonization of St. Faustina, who felt a special duty to help the holy souls.

The idea of helping souls was the result of both the needs of the time and St. Stanislaus’ deep personal experiences amid wartime. Natural disasters, hunger and epidemics increased the despair even more.

This prompted St. Stanislaus to include as one of the charisms of the order to “offer our lives for the holy souls in purgatory, especially the victims of war and disease.” St. Stanislaus even had visions of purgatory.

He would say: “Pray brethren, for the souls in purgatory, for they suffer unbearably.” Join the Marians in prayer at PrayforSouls.com.

Padre Pio, the famed 20th-century Franciscan stigmatic from Italy, had a special relationship with the holy souls. St. Pio once said that he encountered more souls from purgatory than he did those who were in this world.

He also had a special relationship with the military and veterans of World War I and II. On Nov. 15, 1915, he and four other friars from his community were drafted to serve in the Italian Army during World War I. Padre Pio was assigned to the Medical Corps in Naples. His lungs were weak, and time in the cold, damp barracks only made them worse. Because of this, on March 16, 1918, he was declared unfit for service and discharged honorably. That didn’t stop Padre Pio from supporting the soldiers. He appeared on the battlefield. A soldier shared that he was rescued from death by a “beautiful monk.” At the Italian military base, others reported that they, too, had seen a friar on the battlefield who raised his eyes toward heaven and prayed. Padre Pio loved the visits he received from American soldiers. As related in my book Praying With the Saints for the Holy Souls, St. Pio received souls, including those of deceased soldiers during World War II, who, it was said, lined up for his intercession.

In one case, a monk who lived with him spotted strange soldiers near the friary’s fireplace. Wondering how they got in, Padre Pio explained that they were not actual soldiers but departed spirits who had stopped by for help on their way to the hereafter. Such souls beseeched him constantly, and he offered his powerful two-hour Masses along with personal sufferings for their release.

When I was completing a book, Prayers, Promises and Devotions for the Holy Souls, I found every kind of prayer for every circumstance for a deceased soul except a prayer for the war dead. I was on deadline. I searched everywhere in libraries to find a specific prayer dedicated to them, but to no avail.

I had to go to the Feehan Memorial Library & McEssy Theological Resource Center, at the University of St. Mary of the Lake, in Mundelein, Illinois, to return the books I used for my research.

I found myself on the top floor among rare books written on St. Bernadette. I pulled a book off the shelf, and stuck in the pages was the 1946 apostolic intention from Pope Pius XII titled the “War Dead for the Month of November.” It was a beautiful reflection and prayer, perfect to complete the book:

“Those who have fallen in battle deserve to be gratefully remembered. Innocent citizens who were killed are to be counted among the heroes who faced the enemy without weapons. In life they were ready to carry on with quiet bravery, doing the ordinary things necessary for life. Dying they did not lose confidence in human government; in death they utter no reproach. “Now some are buried under the pile of rubble of shattered cities; the remains of others are scattered about deserted prison camps. Many of them died in the state of grace, it is true, but suddenly and without the benefit of the Last Sacraments, and with a debt upon their souls. “We could not minister to them and ease their pain while they were dying, but through our prayers we can help now and obtain for them a speedier release from their sufferings in purgatory.

“Divine Redeemer, at your Ascension you preceded us in order to prepare a dwelling with your Father for your followers. We beg you to allow the souls of our departed ones to take possession of this eternal home in peace and blessedness, where sorrow and war and death are forgotten. May your holy angels keep watch at their tombs until resurrection day when you will call their bodies also to glory. You who live and reign eternally. Amen.”

Susan Tassone is the author of more than a dozen books, available at EWTNRC.com, that often focus on the topic of purgatory.

Watch Susan Tassone on the Women of Grace EWTN Television Program "The War Dead: What Happens to Our Fallen Heroes."

Note: If you have a deceased loved one for whom you would like to offer a mass, we invite you to prayerfully consider a special opportunity made available through Women of Grace in collaboration with Msgr. Matthew Odong and the priests of the Archdiocese of Gulu, Northern Uganda.

Msgr. Matthew will personally arrange for Gregorian Masses and/or single Masses to be offered by priests in the Archdiocese of Gulu for your loved ones. In addition to remembering your loved ones in a special way, this opportunity helps to support their efforts in the formation of seminarians and priests. To find out more or to participate in this opportunity of mercy, visit this Mass Page. 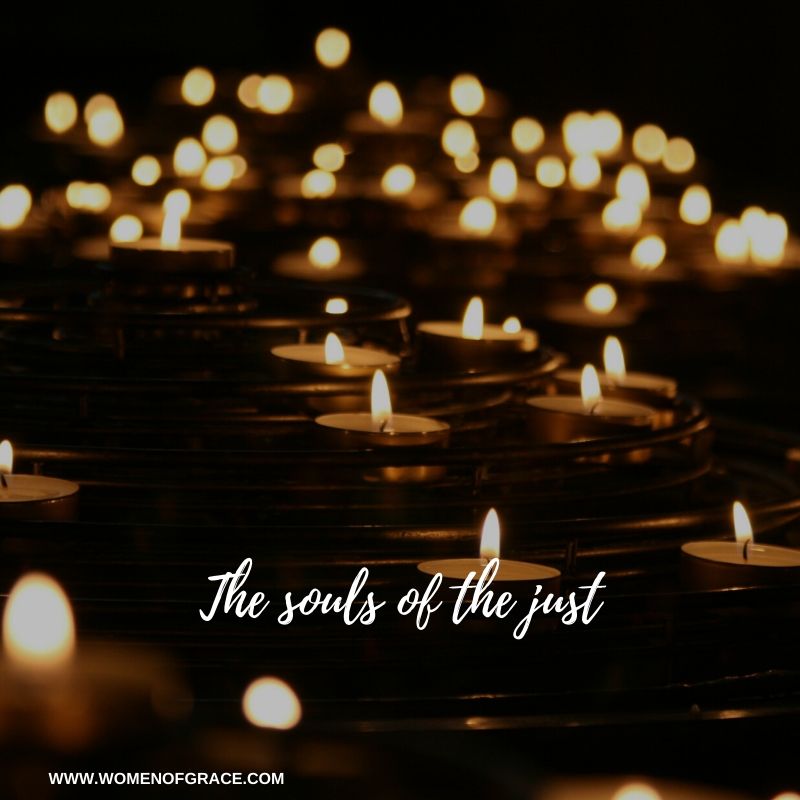 "God formed man to be imperishable; the image of his own nature he made them. But by the envy of the Devil, death entered the world, and they who are in his possession experience it.

But the souls of the just are in the hand of God, and no torment shall touch them. They seemed, in the view of the foolish, to be dead; and their passing away was thought an affliction and their going forth from us, utter destruction. But they are in peace. For if before men, indeed, they be punished, yet is their hope full of immortality; Chastised a little, they shall be greatly blessed, because God tried them and found them worthy of himself. As gold in the furnace, he proved them, and as sacrificial offerings he took them to himself. In the time of their visitation they shall shine, and shall dart about as sparks through stubble; They shall judge nations and rule over peoples, and the Lord shall be their King forever. Those who trust in him shall understand truth, and the faithful shall abide with him in love: Because grace and mercy are with his holy ones, and his care is with his elect."

One of the most hopeful passages in scripture: "But the souls of the just are in the hand of God, and no torment shall touch them."

No matter the trials and reversals you may be currently experiencing or that may lie ahead, know that you are in the hands of God and no torment shall touch you. 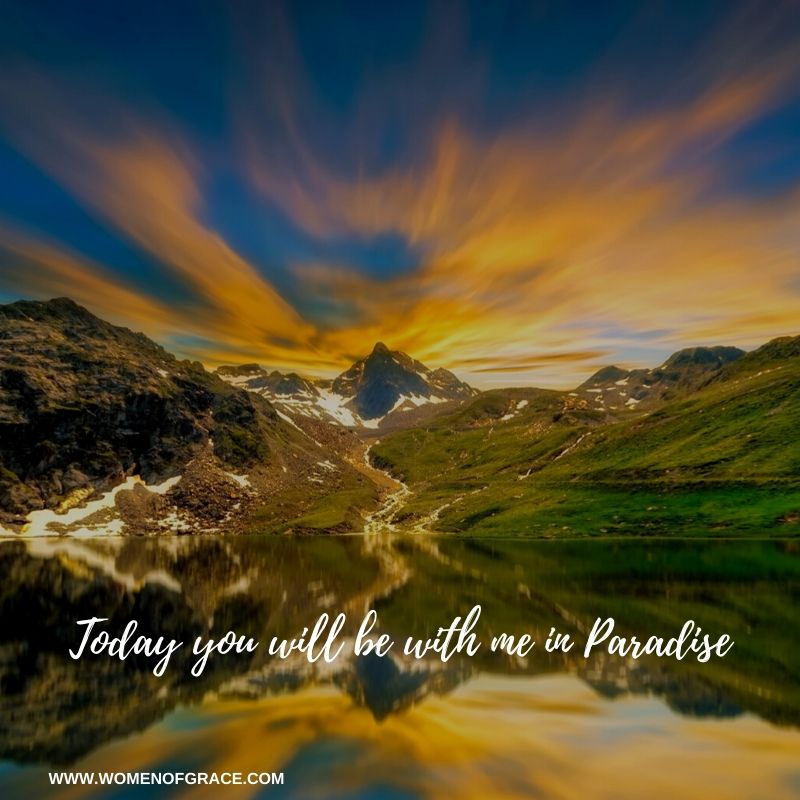 "Amen, I say to you, today you will be with me in Paradise."

Jesus Christ has conquered death. We, His followers, hold onto the hope that through our baptism and life of faith, we too will conquer death in the end. 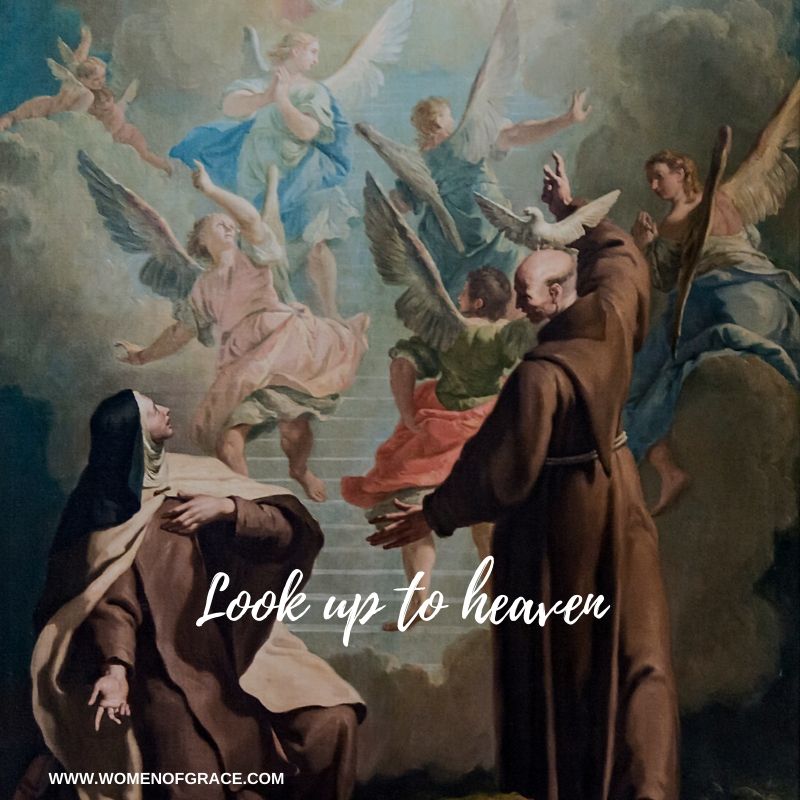 "I beseech you, my child, to look at the heaven and the earth and see everything that is in them, and recognize that God did not make them out of things that existed. Thus also mankind comes into being."

Look to heaven in temptation and trial and remember that God brought everything into being and keeps it so, including you. 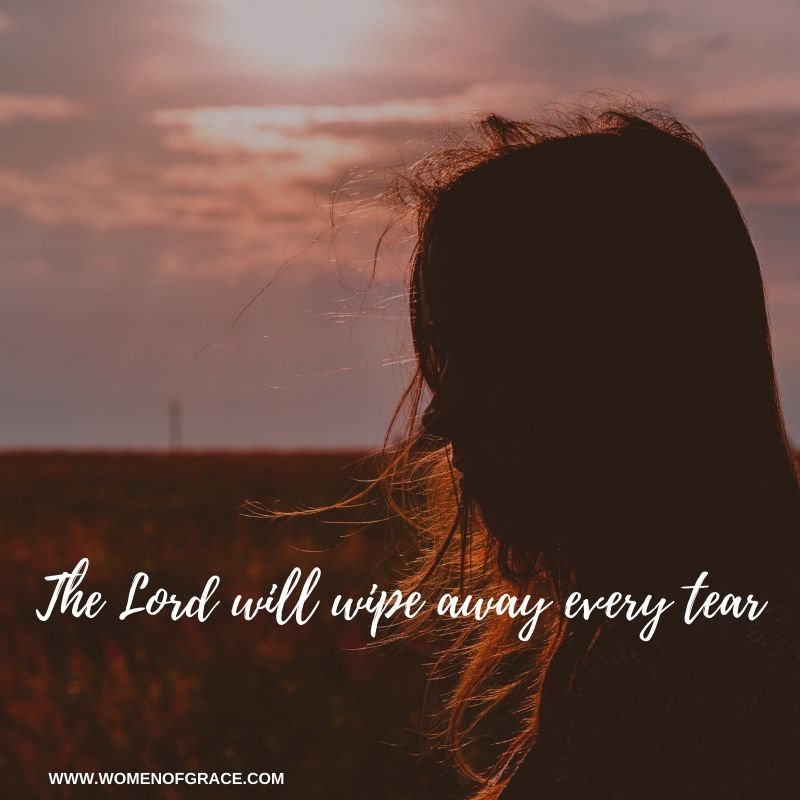 "He will destroy death forever. The Lord God will wipe away the tears from all faces."

Like any good father, Our Heavenly Father knows us implicitly. He is aware of our every sorrow and pain. He embraces us in our need and wipes aware all of our tears. Do you think of God as your tender, loving Father? If not, ask Him to show you today how much He cares for you. 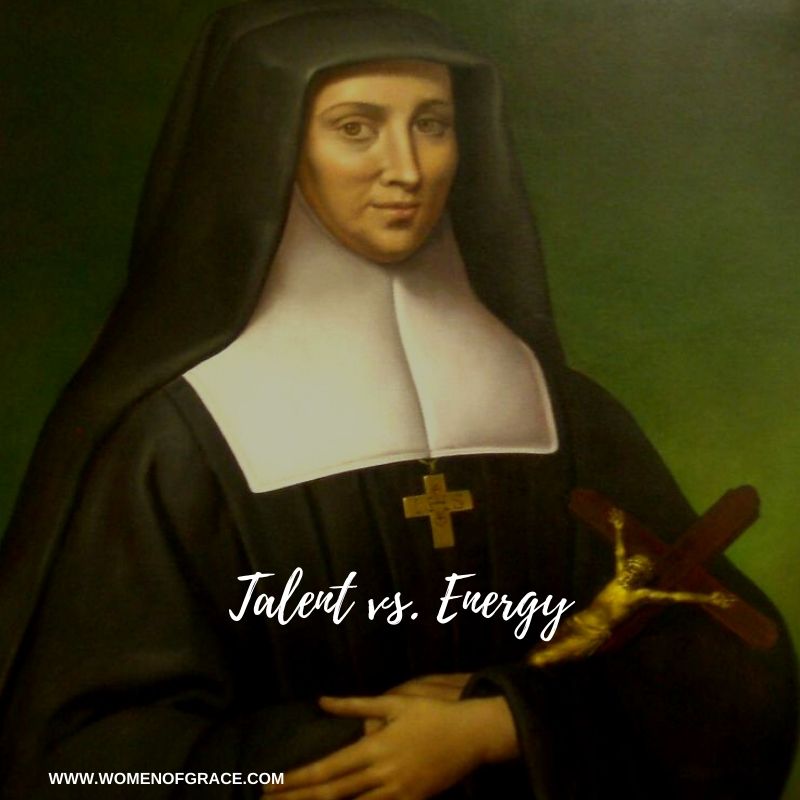 "Hell is full of the talented, but Heaven of the energetic."

What does this quote mean to you? 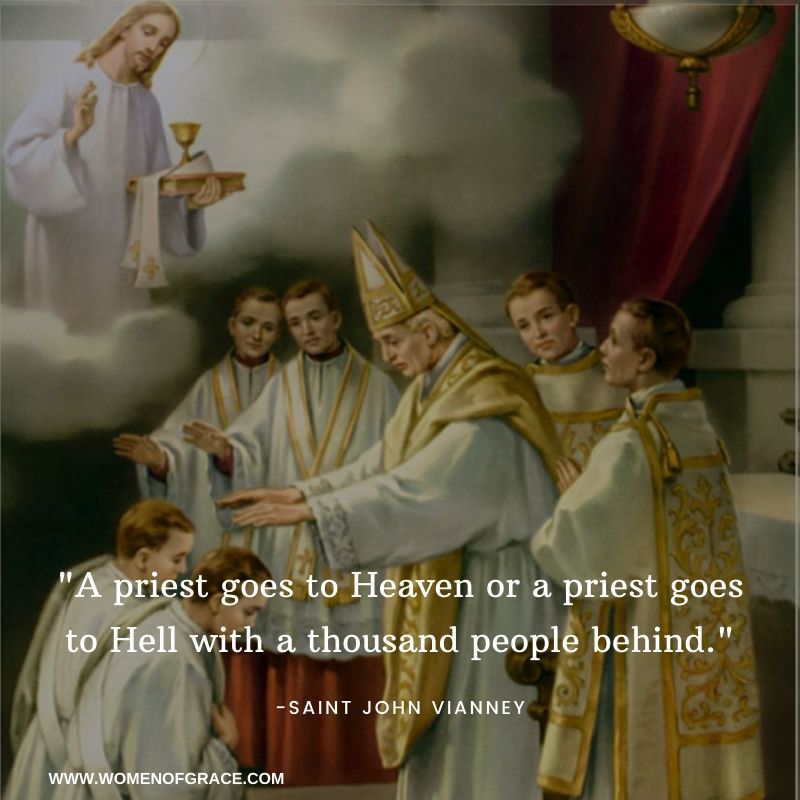 A priest has numerous souls entrusted to his care. Let us pray for our priests today, that they may be holy men of God. 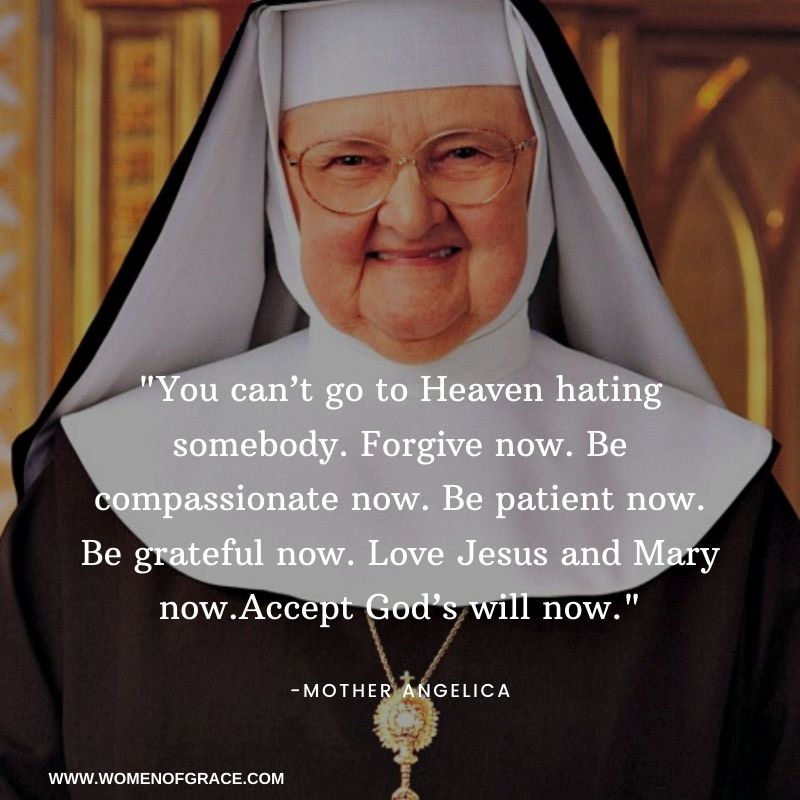 As we enter Thanksgiving week, with Advent soon thereafter, who do you need to forgive? 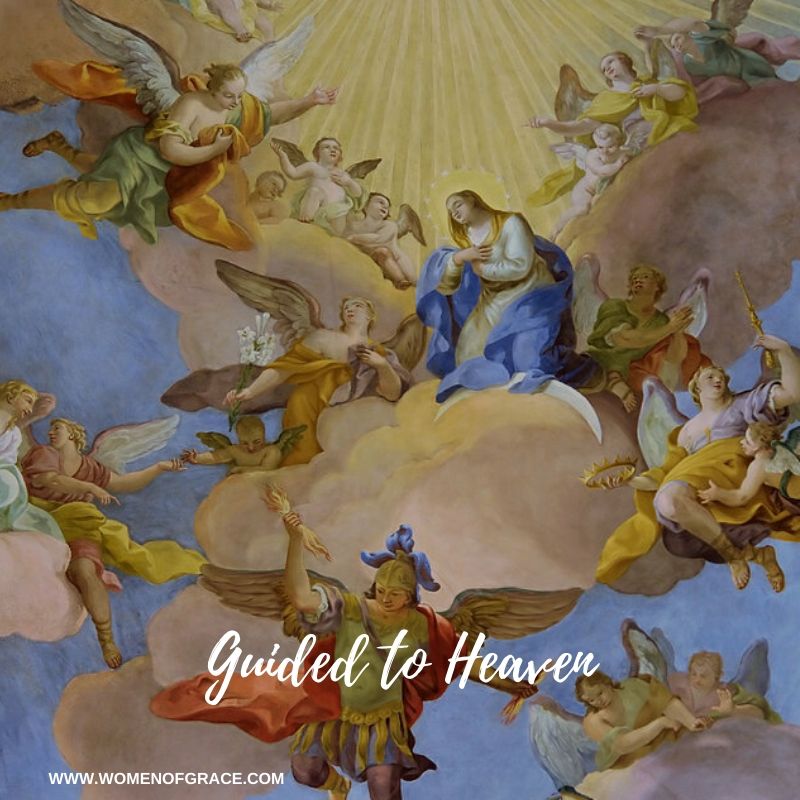 November 22
"As sailors are guided by a star to the port, so are Christians
guided to Heaven by Mary."
-Saint Thomas Aquinas"
For Reflection:
How comforting it is to know that we have a heavenly mother whose every desire is that we be drawn toward eternity with her Son, Our Lord, Jesus. 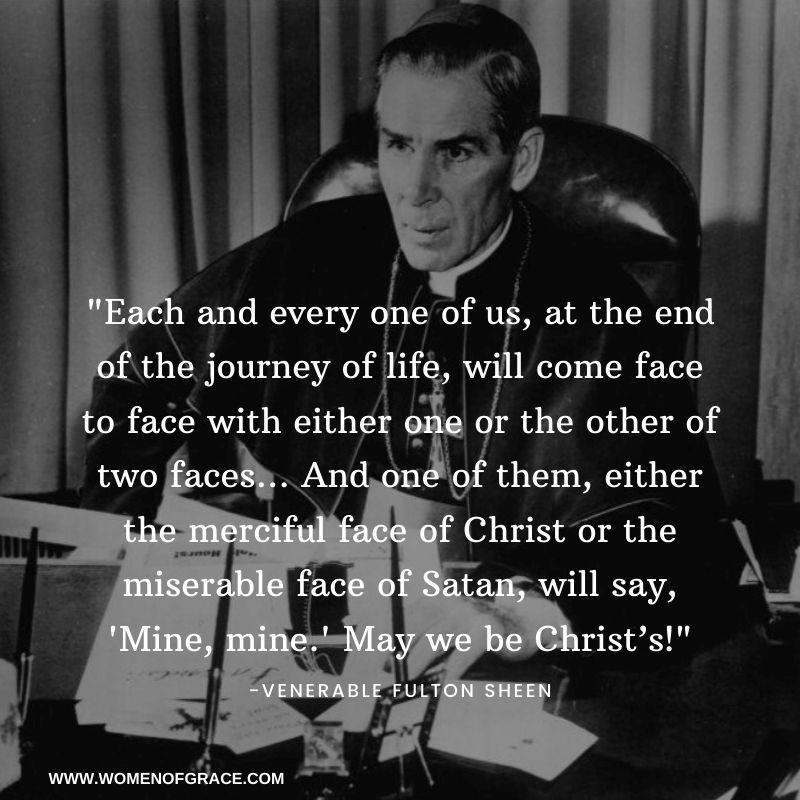 November 21
"Each and every one of us, at the end of the journey of life, will come face to face with either one or the other of two faces… And one of them, either the merciful face of Christ or the miserable face of Satan, will say, 'Mine, mine.' May we be Christ’s!"
-Venerable Fulton Sheen
For Reflection:
May we be Christ's indeed. But not just us, everyone we love and everyone we know.