By Susan Brinkmann, OCDS Staff Journalist In the final days leading up to the next World Youth Day, which will be held in Madrid from August 16-21 of this year, the Vatican has released statistics showing that nearly a half million youth are registered to attend. 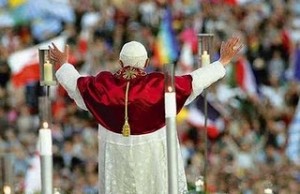 Speaking at a press conference this morning, several Vatican officials, including Cardinal Stanislaw Rylko, president of the Pontifical Council for the Laity, announced that 400,000 youth are scheduled to attend this year's World Youth Day. They will be accompanied by14,000 priests and 744 bishops, of whom 263 will be responsible for catechesis. Two hundred and fifty sites have been assigned for catechesis, which will be delivered in thirty languages with 700,000 copies of the youth catechism known as YOUCAT to be published and distributed in six languages. In addition to those attending the event, 24,000 volunteers from different countries will be involved in various services. For those unable to reach Madrid, "simultaneous gatherings of young people have been organized in countries such as Ukraine, Burundi and Madagascar. They will be linked to the main event in Madrid by television and internet. "Each World Youth Day is an extraordinary experience for a Church which is friend to young people, which shares their problems," said Cardinal Rylko. "A Church which places herself at the service of the new generations. It is an experience of Universal Church - unique of its kind - which embraces the entire planet, of a young Church full of enthusiasm and missionary vigor. It is an epiphany of the Christian faith which has truly planetary dimensions. And young people, especially in the old and profoundly secularised continent of Europe, have particular need of all this." The cardinal recalled when the event was last held in Spain, in Santiago de Compostela in 1989, which was where World Youth Day came to be structured as it is known today: with three days of catechesis, a prayer vigil on the Saturday night, then the closing Eucharistic celebration and the dispatch of young people as missionaries. "Over succeeding years", he added, "each WYD has brought something new to the program: the Way of the Cross at Denver, U.S.A., in 1993; preparatory days spent in dioceses prior to the main event and the 'Festival of Youth' (a kind of cultural programme) at Paris, France, in 1997; the 'Feast of Forgiveness' (300 confessionals crowded with young people in the Circus Maximus) at Rome in 2000; the 'Vocations Fair' at Toronto, Canada, in 2002, and the adoration of the Eucharist at Cologne, Germany, in 2005. Thus the proposal made to young people on each occasion is in continual evolution, seeking to respond to the true spiritual needs of today's youth". As always, the Pope's presence will be the culminating moment of the event. He will arrive on August 18 and conduct a walk under the Alcala Gate at Independence Square with youth from five continents. On the following day, he will meet with young religious women and university professors before conducting the Way of the Cross in Madrid's Cibeles Square. Before celebrating Mass with seminarians at the Cathedral of Our Lady of Almudena on Saturday morning, he will hear confessions in the Jardines del Buen Retiroas. Later that evening, he will conduct a vigil with young people at the Cuatro Vientos Airfield. On his final day in Spain, the Pope will arrive by popemobile at the Cuatro Vientos Airfield where he will celebrate the closing Mass. This year's World Youth Day will be even more special because it will take place in light of the recent beatification of Pope John Paul II, the founder of World Youth Day. "Thus John Paul II will return among the young people he loved so much, and who loved him," Cardinal Rylko said. "He returns as blessed, patron and protector." © All Rights Reserved, Living His Life Abundantly®/Women of Grace®  http://www.womenofgrace.com