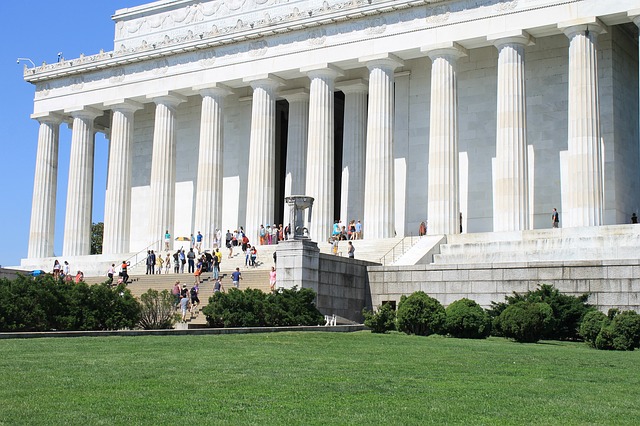 Steps of the Lincoln Memorial where the incident took place.

A video of Catholic school students wearing MAGA hats supposedly confronting and mocking a Native American man at the March for Life went viral this weekend and sparked an instant wave of condemnation – but new video shows a much different story.

Newsbusters is reporting on the latest colossal faux pas by the mainstream media which was only too happy to pile on the outrage after a video surfaced allegedly showed Catholic students from Covington Catholic High, an all-male school in Kentucky, harassing Native American Vietnam veteran Nathan Philips at the Lincoln Memorial on Friday.

Within hours, the boys’ faces – and prominent images of their “Make America Great Again” hats - were appearing on the screens of almost every network in America, accompanied by accusations of racism. A tearful Philips, a well-known Native American activist, was interviewed and accused the boys of chanting "Build that wall! Build that wall!" At one point, the outrage - which at the time seem perfectly justified - grew to such an extent that even Covington Catholic High and the Diocese of Covington issued a joint statement condemning their behavior.

However, new details began to emerge in the form of an unedited version of the video which clearly shows a much different event unfolding on the steps of the Lincoln Memorial. In these longer videos, Philips is clearly seen approaching the boys and banging his drum in their faces. One of the boys, Nicholas Sandmann, who was featured the most prominently in the video, stands face-to-face with Philips as he gets closer and closer, staring him in the eye as he continued to bang on the drum. After a few minutes, Philips walked away.

Not long after this, the parent of a student who was in the crowd that day gave a statement to ABC which confirmed what is seen in the unedited footage of the confrontation:

“ . . .[A]n indigenous American man with a few other men approached the center of the boys and in particular one boy. The boy from my school didn't say anything or move. He just stood there. As time went on, the man with the drum got closer to his face. After a couple of minutes, the man standing there beating the drum in the boy's face, he walked away.”

Finally, Nick Sandmann issued his own statement which lent a whole different perspective to the incident.

Apparently, the students were told to gather on the steps of the Lincoln Memorial at 4:30 to prepare to board their buses.

“When we arrived, we noticed four African American protesters who were also on the steps of the Lincoln Memorial. I am not sure what they were protesting, and I did not interact with them. I did hear them direct derogatory insults at our school group. The protesters said hateful things. They called us ‘racists,’ ‘bigots,’ ‘white crackers,’ ‘faggots,’ and ‘incest kids.’ They also taunted an African American student from my school by telling him that we would ‘harvest his organs.’ I have no idea what that insult means, but it was startling to hear," Sandmann wrote.

“Because we were being loudly attacked and taunted in public, a student in our group asked one of our teacher chaperones for permission to begin our school spirit chants to counter the hateful things that were being shouted at our group. The chants are commonly used at sporting events. They are all positive in nature and sound like what you would hear at any high school. Our chaperone gave us permission to use our school chants. We would not have done that without obtaining permission from the adults in charge of our group.”

At no time did Sandmann recall any student chanting anything other than the school song.

The tactic didn’t work, however, and Philips approached, coming to stand just inches in front of Sandman while banging his drum.

“To be honest, I was startled and confused as to why he had approached me. We had worried that a situation was getting out of control where adults were attempting to provoke teenagers. I believed that by remaining motionless and calm, I was helping to diffuse the situation. I realized everyone had cameras and that perhaps a group of adults was trying to provoke a group of teenagers into a larger conflict. I said a silent prayer that the situation would not get out of hand.”

It didn’t – at least not on the steps of the Lincoln Memorial. Philips eventually turned around and left, but the firestorm was just beginning.

A carefully edited video, which showed little more than Sandman locked in a kind of stare-down with Philips, made it onto social media and went viral, eventually being picked up by news organizations, prompting widespread condemnation of the boys. This led to a backlash that included threats of violence and even death.

“l have received physical and death threats via social media, as well as hateful insults. One person threatened to harm me at school, and one person claims to live in my neighborhood. My parents are receiving death and professional threats because of the social media mob that has formed over this . . .

“I am being called every name in the book, including a racist, and I will not stand for this mob-like character assassination of my family’s name. My parents were not on the trip, and I strive to represent my family in a respectful way in all public settings.”

Sandman considers himself to be a faithful Christian and practicing Catholic.

“l always try to live up to the ideals my faith teaches me - to remain respectful of others, and to take no action that would lead to conflict or violence. I harbor no ill will for this person. I respect this person’s right to protest and engage in free speech activities, and I support his chanting on the steps of the Lincoln Memorial any day of the week. I believe he should re-think his tactics of invading the personal space of others, but that is his choice to make.”

Thankfully, many media outlets are now retracting their condemnations, albeit reluctantly by some, but the damage has been done. This young man and his family have been permanently affected by this appalling incident. In addition to those who are responsible for publishing the first misleading video, the rush to judgement on the part of the press is equally unacceptable.

We need to keep everyone involved in this unfortunate incident in our prayers – the students, family and school whose reputations have been maligned, those who instigated the incident, and those who rushed to judgement before the full story was told.

A civilized nation can and must do better than this!