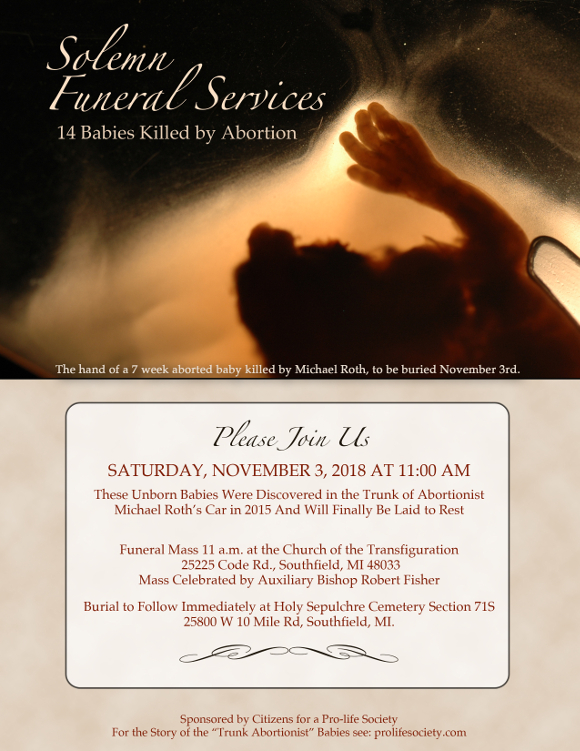 Bishop Robert Fisher, Auxiliary Bishop of the Archdiocese of Detroit, will hold a funeral mass and solemn burial for the remains of 15 aborted babies whose bodies were found in 2015 in the trunk of a Michigan abortionist.

Thanks to the efforts of Monica Migliorino Miller, Ph.D., director of Citizens for a Pro Life Society (CPLS) and a Women of Grace® board member, the bodies of these innocent victims of the “safe and legal” abortion industry in the U.S., who were callously tossed into the trunk of an abortionist’s car, will be given the dignified treatment they deserve, even if that is just to see them property buried.

According to CPLS, the bodies were found in 2015 in the trunk of the car of Michigan abortionist Michael Roth by the West Bloomfield police department. The discovery was made after Roth struck and critically injured a special needs child with his car. It was when police impounded his vehicle that the aborted baby remains were found in the trunk along with abortion related equipment and drugs that he allegedly stole from his employer, Angel A. Ojeda, an abortionist who operates the Eastland Women’s Clinic in Eastpointe, Michigan. Apparently, Roth was using the drugs and the equipment to perform illegal at-home abortions for which he was fined $15,000 in 2004.

Roth originally ran an abortion clinic for 20 years but lost his least in 2014 and, thanks to the work of Lynn Mills of Pro-Life Michigan, was unable to find another location.

As Mills explains, “Roth has a sad and disgusting history of lawsuits, Attorney General violations, including doing at-home abortions in the 1990's, and sanctions placed on him by Licensing and Regulatory Affairs (LARA), the licensing arm of the State of Michigan.”

She managed to influence prospective landlords not to rent to him. In 2015, he was able to obtain a lease, but was not permitted to perform abortions on the premises and eventually closed that office as well.

It wasn’t until the accident that police discovered the remains, the drugs, and the abortion paraphernalia in his trunk. He claimed that he was transporting the remains to his boss at the time of the accident and that the drugs and equipment came from Ojeda. However, Ojeda denied giving him permission to have the drugs.

“A search warrant was completed on Roth’s home and office. Additional vials of Fentanyl were found at the home. Both the Fentanyl found in the car and in the house were matched to the Fentanyl that was allegedly stolen from the women’s clinic,” said a 2016 press statement.

“The search warrant also revealed a large amount of cash with names and what is believed to be pregnancy information attached to each bundle of cash, medical materials such as syringes, disposable scalpels and empty containers similar to the ones filled with post-conception material found in Roth’s car.”

Roth was eventually convicted of ten counts, including three counts of larceny, six counts of identity theft, and one count of illegal possession of drugs. He was ordered to pay a $798 fine and serve 18 months probation.

Mills, who attended the court hearings, states: “One mill worker turned state’s evidence to save herself and . . . admitted how she stole various medical items for him. I could go on about how Roth sat in court, several days, staring at the ceiling, seeming cold and indifferent to what was going on, like he didn’t belong there. He had his M.D. title taken away in September of 2017 and is no longer referred to as doctor. Mr. Roth is how he is now referred to by the State. Roth was finally convicted a year ago in November of 2017 on three counts of Larceny in a Building. He got a slap on the wrist, lost his medical license and received no jail time. He still has not paid his fine to the State or to Macomb County. He gets to live his life, but the babies don’t. He has a name, but the babies don't.”

While the babies’ remains were being held as evidence, Dr. Miller worked for two years to get the “trunk abortionist babies” released so that they could be properly buried.

On Nov. 3, Bishop Fisher will preside over the funeral Mass and burial for 14 of the babies. A fifteenth baby will be buried in a separate funeral on November 24 in Livingston County.

The pro-life groups involved in the rescue of these innocent children are asking the public to make every effort to attend these very special events.