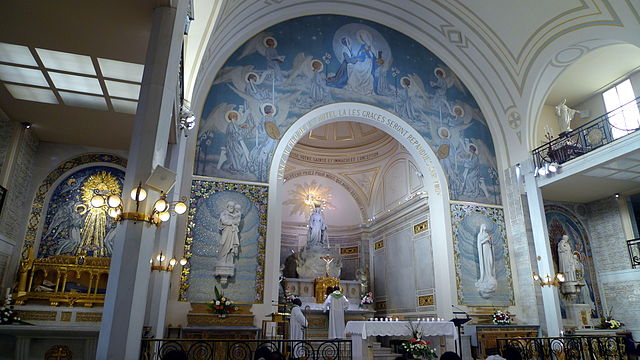 Interior of the Chapel of Our Lady of the Miraculous Medal, Rue du Bac, Paris (Wikicommons)

November 27th each year commemorates the manifestation of Our Lady’s Miraculous Medal. This sacramental, known and beloved worldwide, arose from the humblest of origins, in keeping with those of the Virgin whose image it bears.

Our reflection on Our Lady of the Miraculous Medal begins by considering the life of Saint Catherine Labouré, a Sister of the Daughters of Charity, founded by Saints Vincent de Paul and Louise de Marillac in France in 1633.

Catherine Labouré was born into a large family near Dijon, France, in 1806. Although her parents were well-educated, Catherine received only minimal education. Her mother died when Catherine was nine years old; the grieving girl took a small statue of Our Lady into her hands, kissed it, and said, “You will be my mother now.” Thus was set into motion a strong connection to Our Lady which would come to stunning revelation later in Catherine’s life.

Catherine became responsible for running her father’s thriving farm household — cleaning, sewing, and cooking — for her large family and also their many field workers. As a teenager, she voiced her deep desire to enter religious life. Her father refused consent for several years, finally agreeing only when family members intervened. At last, Catherine achieved her long-cherished dream, entering the Daughters of Charity in Paris in 1830.

Like many others lacking in formal education, Catherine displayed a deep spirituality from a very young age, evidenced by numerous visions experienced periodically. The most significant of these occurred only months into her novitiate.

At 11:30 on the night of July 19, 1830, a small voice interrupted Catherine’s sleep. A child, four or five years old, whom Catherine perceived as her guardian angel, directed her to follow him to the convent chapel. There Catherine witnessed the arrival of a most beautiful young woman who seated herself on a chair on the steps of the altar.

Recognizing the woman as the Blessed Virgin, Catherine fell onto her knees on the altar steps, resting her hands on Our Lady’s lap. For two hours, Catherine listened as Our Lady warned of national troubles to come for France, and also informed Catherine that she would be entrusted by God with a challenging special mission, not described on that occasion. She encouraged Catherine to approach the foot of the altar with an open heart for courage and guidance when the time came.

Recounting this remarkable event, Catherine stressed the phenomenon of radiant light which surrounded her angelic escort as they made their way to the chapel. Light of an unearthly brilliance appeared again four months later, in the early evening hours of November 27th, when Our Lady favored Catherine with her presence once more. This time, Our Lady was standing, clothed in white, in her hands a golden ball representing the world.

The brilliant light of this vision emanated from numerous rings on Our Lady’s fingers emitting dazzling rays in varying intensity. Our Lady explained these as graces to be granted to those asking for them; gems lacking rays of light represented graces gone unrequested. 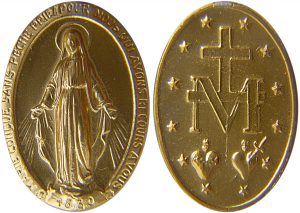 Then the nature of Catherine’s God-given mission was revealed in the form of a medal, oval in shape, Our Lady’s image on the front, surrounded in gold with the words, “O Mary, conceived without sin, pray for us who have recourse to thee.” On the reverse, as she recounted, Catherine beheld “…a large M surmounted by a bar and a cross; beneath the M were the Hearts of Jesus and Mary, the one crowned with thorns, the other pierced with a sword.”

Catherine heard Our Lady’s direction: “Have a Medal struck after this model. All who wear it will receive great graces; they should wear it around the neck. Graces will abound for those who wear it with confidence.” Catherine understood that while fulfilling this mission, her own identity was to be kept hidden from all except her confessor. She abided by this stricture despite numerous challenges.

With episcopal approval, the Medal of the Immaculate Conception, as it was called initially, was produced and its distribution begun in 1832. Cited in an anthology of Marian apparitions entitled A Woman Clothed with the Sun, Reverend Joseph I. Dirvin, CM, stated: “The spread of the Medal was so rapid and the flood of favors it let loose so startling, that the faithful gave it the name ‘Miraculous.’”

Catherine lived out her religious vocation in anonymity for nearly forty-six years following the apparitions, faithfully performing her humble duties. It was only six months prior to her death in 1876 that, having received Our Lady’s permission through prayer, she revealed herself as the witness of the Miraculous Medal apparitions.

According to Father Dirvin, “Catherine Labouré…..realized perfectly Our Lady’s objective: not the performance of heroic, or even unusual, deeds by her clients, but the perfection of their ordinary states of life.”

Humility and simplicity characterized the life of Catherine Labouré, Saint of the Miraculous Medal — yet her incorrupt body has been viewed by countless pilgrims in the chapel where her hands rested in the lap of the Mother of God.

Founded and staffed by the Vincentian Fathers, Philadelphia’s Central Association of the Miraculous Medal was formed in 1915. Since 1927, Miraculous Medal novena devotions have been held at the Shrine. The novena’s popularity spread rapidly and continues in many countries still today. The number of favors and graces reported as received by the faithful is incalculable.

O Mary, conceived without sin, pray for us who have recourse to thee.