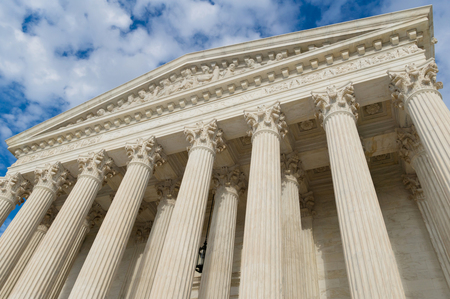 The next Supreme Court term could prove to be one of the most pivotal terms since the 2015 decision that legalized same-sex marriage as it takes on three cases that will determine whether or not the word “sex” in the Civil Rights Act of 1964 can be stretched to include a persons “gender identity.”

Writing for the Daily Signal, John Bursch, Senior Counsel of Alliance Defending Freedom, explains that Title VII of the Civil Rights Act has long protected women, along with racial and religious minorities, from unjust discrimination in the workplace. However, LGBTQ activists have been using the lower courts to redefine “sex” in the Civil Rights Act to include gender identity, thus allowing transgendered Americans to demand the right to access bathrooms and locker rooms according to their perceived rather than their biological sex.

As Bursch explains, it’s not quite that simple. “Redefining the term ‘sex’ in that law to mean ‘gender identity’ would create chaotic, unworkable situations and unjustly punish business owners like Tom while destroying important gains women and girls have made over the past 50 years.”

For example, in a Connecticut high school, athletes such as Selina Soule have been denied more than 50 chances to compete in next-level races because two boys who claim to be identifying as females are competing on the team.

In an equally egregious case, city officials in Anchorage, Alaska are using gender ideology to try to force a women’s shelter into allowing biological males to sleep just three feet away from women who have been victimized by rape, sex trafficking, and domestic violence.

One of the cases that will come before the Supreme Court this fall involves Thomas Rost, the owner of R.G. & G.R. Harris Funeral Homes in Detroit. Rost was sued by a male employee who decided to identify as a female and wanted to meet with deceased grieving family members dressed as a female. To do so would have meant violating the family’s sex-specific dress code.

The EEOC (Equal Employment Opportunity Commission) and a lower court decided in favor of the employee and attempted to redefine “sex” in Title VII to include transgenders rather than what it’s long-established meaning of ensuring equal opportunity in employment regardless of one’s race, religion, national origin, or sex.

“Neither government agencies nor the courts have authority to rewrite federal law by replacing ‘sex’ with ‘gender identity’—a change with widespread consequences for everyone,” said Bursch. “Businesses have the right to rely on what the law is—not what government agencies want it to be—when they create and enforce employment policies. The funeral home wants to serve families mourning the loss of a loved one, but the EEOC has elevated its political goals above the interests of the grieving people that the funeral home serves.”

As explained in the petition filed with the U.S. Supreme Court in R.G. & G.R. Harris Funeral Homes v. Equal Employment Opportunity Commission, “the Sixth Circuit’s decision undermines the primary purpose for banning discrimination based on sex—to ensure ‘equal opportunities’ for women , and ‘eliminate workplace inequalities that [have] held women back from advancing…. Employment reserved for women—like playing in the WNBA or working at a shelter for battered women…—now must be opened to males who identify as women. The same is true of sports and educational opportunities under Title IX. The Sixth Circuit’s ruling impedes women’s advancement….”

“Substituting ‘gender identity’ for ‘sex’ in nondiscrimination laws also threatens freedom of conscience,” the petition continued. “Statutes interpreted that way have the effect, for instance, of forcing doctors to participate in—or employers to pay for—surgical efforts to alter sex in violation of their deeply held beliefs…. In sum, the Sixth Circuit ushered in a profound change in federal law accompanied by widespread legal and social ramifications.”

The two other cases that will come before the court involve a lesbian and gay skydiver who were both fired from their jobs because of their sexual orientation.

The U.S. House of Representatives attempted to circumvent the Supreme Court by passing the Equality Act, which would amend the Civil Rights Act to prohibit discrimination on the basis of sexual orientation and gender identity in employment, housing, public accommodations, public education, federal funding, credit, and the jury system.

However, the bill has stalled in the Senate where it currently has no hope of passing.