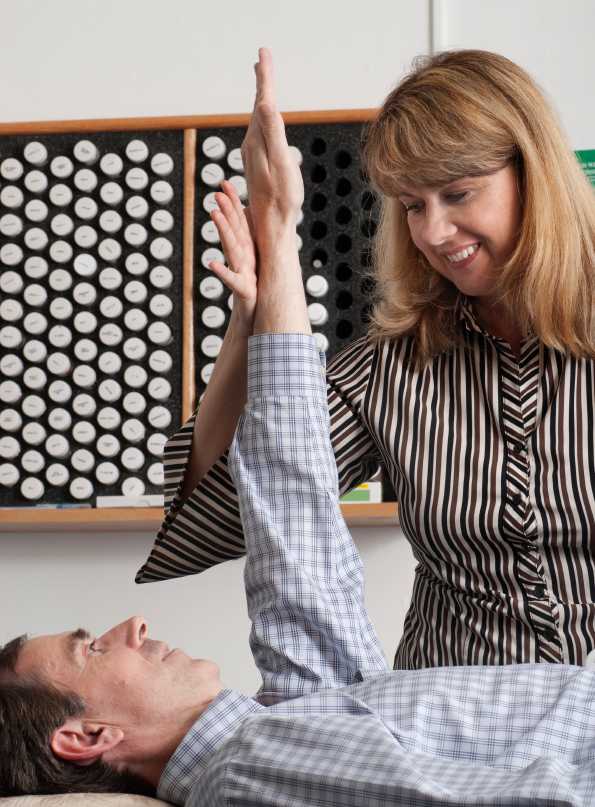 One of our readers wrote to us and described a strange procedure her chiropractor performed during her visit.

“She has me lay on an examination table with my right arm extended straight up in the air. She places her left wrist against my right wrist, and places her left hand on an organ. She asks me to try to resist her as she pushes with her wrist against my wrist. If I am able to push her wrist she says that is a defective area. Do you know what this is?”

Yes! This procedure is known as muscle testing, which is also known as Applied Kinesiology (not to be mistaken for Kinesiology, which is the study of motion). Muscle testing is an alternative therapy based on the notion that every organ dysfunction is accompanied by a specific muscle weakness which enables diseases to be diagnosed through muscle-testing procedures. Proponents claim diseases can be evaluated through specific patterns of muscle weakness which they can heal by manipulating or unblocking alleged body energies along meridian pathways, or by infusing energy to produce healing in certain organs.

Patients can also be tested while chewing certain substances and if a muscle tests “weaker” after a substance is placed in the patient’s mouth, it supposedly signifies disease in the organ associated with that muscle.

The same test is applied for determining nutrient deficiencies. If a weak muscle becomes stronger after a nutrient (or a food high in the nutrient) is chewed, that supposedly indicates “a deficiency normally associated with that muscle.” Some practitioners contend that muscle-testing can also help diagnose allergies and other adverse reactions to foods.

Muscle testing is regarded by the medical and scientific community to be a pseudoscience, but researchers have nevertheless subjected the method to several well-designed and impartial tests to determine if it has any credibility.

Apparently, it does not.

In one test, three practitioners testing eleven subjects all made significantly different assessments on the same patients. Another set of researchers who conducted an elaborate double-blind trial concluded that muscle response appeared to be a random phenomenon.

According to Dr. Harriet Hall, the results of a 2013 double-blind randomized study came to a similar conclusion. Designed to assess the validity of muscle testing, researchers  found that the results reported by the practitioners were no better than chance.

They also reviewed the published literature on muscle testing and commented: “The research published by the Applied Kinesiology field itself is not to be relied upon, and in the experimental studies that do meet accepted standards of science, Applied Kinesiology has not demonstrated that it is a useful or reliable diagnostic tool upon which health decisions can be based.”

After conducting an investigation of the research into AK, Dr. Hall concluded: “Applied kinesiology (AK) is a bogus muscle-testing technique most commonly used by chiropractors but also by some others. It is neither scientific nor valid. It’s based on a delusion."

These results are not surprising when we consider the very unscientific roots of this practice. The inventor was a man named George Goodheart, a Michigan chiropractor who “discovered” applied kinesiology in 1964. He combined elements of psychic philosophy, Chinese Taoism, and a belief in what early chiropractors called “Innate Intelligence” a kind of universal energy or “life force” when creating this procedure.

Goodheart’s own published materials, along with those of other early proponents of applied kinesiology, openly describe the pantheism that underpins this practice.

“He combined the concept of ‘innate intelligence’ with the Eastern religious concept of energy ( chi) and the idea that muscles reflex (reflect back) the condition of each of the various body organs via the chi’s meridians. `Innate intelligence’ is described as spiritual intelligence which runs the body and is connected to the universal intelligence though the nervous system. . . .” (Kinesiology, Muscle Response Testing, p. 1])

In other words, besides being pseudoscientific and totally unreliable as a diagnostic tool, it is also based on a belief system that is not compatible with Christianity.