When Pope Clement VIII penned these words, the grace-filled devotion of Forty Hours already had been in practice for some sixty years, cited to have begun in Milan, Italy, around the year 1530. The Blessed Sacrament, the Real Presence of Jesus, would be exposed in the monstrance (a vessel holding the consecrated Host), one parish church at a time, for forty hours in memory of the time during which Jesus lay in the tomb following His Crucifixion. At the conclusion of the forty-hour span, the devotion would then commence at another parish, and this progression would continue “the whole year round.”

The devotion spread rapidly, eventually making its way to other countries, including the United States. In our country, an influential proponent was Saint John Neumann (1811 – 1860). While Forty Hours already was being celebrated in some parts of the country, during Saint John Neumann’s assignment as Bishop, he initiated a schedule of individual Philadelphia parishes so that Forty Hours would be held systematically throughout each year. The process became popular throughout the country, in short time gaining approval for all U. S. dioceses.

While the format may vary somewhat from parish to parish, devotions typically begin at the conclusion of morning Mass on the first of three consecutive days. Immediately following Mass, the Blessed Sacrament is exposed in the monstrance on the altar and rests there throughout the day. The church building remains open so that the faithful can enjoy periods of private adoration and prayer until evening devotions begin. These may feature traditional hymns, liturgical evening prayer, a Scripture reading and homily, and Benediction of the Blessed Sacrament to conclude the day’s devotions. 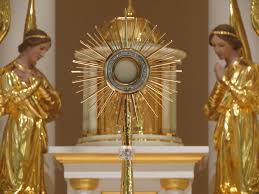 This format would be repeated on the following two days, except that the third evening’s closing devotions generally end with a solemn procession of the Blessed Sacrament, the monstrance being carried throughout the church by the celebrant while a traditional hymn such as Pange Lingua is sung. Members of the congregation – representatives of parish ministries and candidates for First Holy Communion for example – often participate in the procession.

A personal reflection, composed prior to devotions on this year’s closing evening, follows:

The ceremonial candelabras, each holding seven tapers, are lit, one on either side of the monstrance. They glow gently, waiting expectantly for devotions to begin. In the dimly lit church, the spotlight shining on the altar reflects upward, casting its glow onto the monstrance and then directly up to encircle the huge crucifix. The wispy outer edge of this image is reminiscent of the hay in the manger. Birth to death to eternity – the cycle finds its completion in the Luna, the precious golden vessel in the center of the monstrance, carrying the Body, Blood, Soul, and Divinity of the Son of God.

During these sacred hours, we have come together as a parish family again this year. Granted, the congregation is sparse tonight. Devotions may be a bit different tonight as well – scaled down, quieter, more sedate – but reverent and packed full of meaning nonetheless – and closing as always, with the strains of the Pange Lingua warming our hearts, until next year.

Forty Hours merits a unique place in the hearts of the faithful, with the abundance of emotions and sensory experiences it evokes. We can find the “peace that the world cannot give” (see Jn 14:27) simply gazing at the Lord, who has waited expectantly for us to join Him. Spending personal time with Jesus exposed in the Blessed Sacrament, then participating in the beautiful age-old devotions, can bring a measure of that inner peace for which we all long. The spiritual benefits, for each individual and for the entire parish, cannot be calculated.

During these unusual times of social distancing, some parishes may be modifying Forty Hours devotions in various ways. Live streaming during daytime Exposition and/or during evening devotions may be offered as an alternative to in-church attendance. This is a way for the faithful to participate in the devotions from their own homes and on their own time schedule. Online access to video recordings provides an opportunity to “rest with the Lord” during the small hours of a sleepless night, for example.

Pope Clement could not have foreseen that four-plus centuries later, and in spite of challenging circumstances worldwide, members of the faithful would continue to celebrate Forty Hours – a wellspring of great graces for the taking.