Commentary by Susan Brinkmann, OCDS Staff Journalist People have long been uncomfortable with the premise of TLC's Toddlers and Tiaras which features toddlers in womanly clothing who strut around the stage like adult pageant contestants, but a recent show featuring a three year-old dressed like a prostitute has sparked a national outcry. 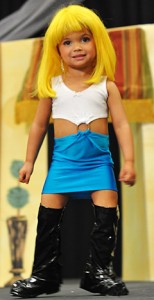 Calling the show "TV for Pedophiles", the Media Research Center's president Brent Bozell has written a hard-hitting piece about the impropriety of the show which recently leaped across its already over-stretched boundaries to feature a three year-old girl named Paisley who was dressed as the Julia Roberts prostitute character in the 1990 film, Pretty Woman. Paisley strutted across the stage dressed in a skimpy tank top, tight skirt, thigh high boots and a blond wig. "This scandal came just one week after TLC was forced to pull its Facebook page because of the deluge of negative comments over an episode that featured a little girl named Maddy dressed up to look like Dolly Parton, complete with wig and fake breasts and buttocks," Bozell writes. "The little girl stuck out her altered rear end and bounced around like a streetwalker." Apparently, Maddy's personal stylist didn't like the "adult enhancements" but the girl's hyper-ambitious mother overruled him. "It's enough to make you wonder why social services wasn't called," Bozell writes. The Parents Television Council (PTC) was equally outraged. "Whether you love or loathe child beauty pageants, everyone should agree that sexualizing a three-year-old little girl is wrong," said Melissa Henson, the director of communications and public education for the PTC. "But that is exactly what the TLC network has done." "Such brazen and wanton material should qualify as child exploitation or abuse. Instead of creating ratings-friendly buzz, TLC engendered outrage among millions of parents and grandparents who are tired of seeing children exploited for ratings and robbed of their innocence by a greedy entertainment industry that will stop at nothing to make a buck." You know something is really wrong with a show when even the uber-liberal ladies of ABC's The View speak out against it.  "If you think pedophiles are not watching this show, I've got a bridge I want to sell you," said the show's co-host, Sherri Shepherd. Even one of the other pageant moms was shocked. "Us pageant moms already take a huge rap for what we're doing to our little girls," she told US Weekly. "[But] it's outfits like that the give us a bad rap... I would never, ever do that to my little girl." Not surprisingly, the cash-hungry TLC, which features other risqué "reality shows" such as Sister Wives,  has made no apologies for the show. Nor has Paisley's own mother, Wendy Dickey, who claims the episode was nothing more than a hilarious skit with her daughter later appearing as the "reformed" Roberts character. Dickey says she's "very surprised" by all the controversy. " . . .I'm just blown away that it has gotten this far. But there were no problems at the pageant. Everyone who saw the full skit got it - what I was trying to do - and it was not about sexualizing my little girl." She says the fact that her daughter is only three makes the skit less offensive than dressing up a 10 year-old like a hooker. "She's three. If she was 10, I never would have considered this. But as young as she is, I thought it was very comical," Dickey said, then added, "It was the cutest thing ever. It was very innocent." Bozell writes, "The toddler is innocent, but the getup was not. It's because of that child's innocence that this is so offensive. For the mother to deny that makes her delusional." Sadly, the judges didn't have a problem in the world with Paisley's inappropriate costume. They awarded her the highest honor - "Grand Supreme" - for her age group. © All Rights Reserved, Living His Life Abundantly®/Women of Grace®  http://www.womenofgrace.com Photo of Paisley by TLC/Splash News